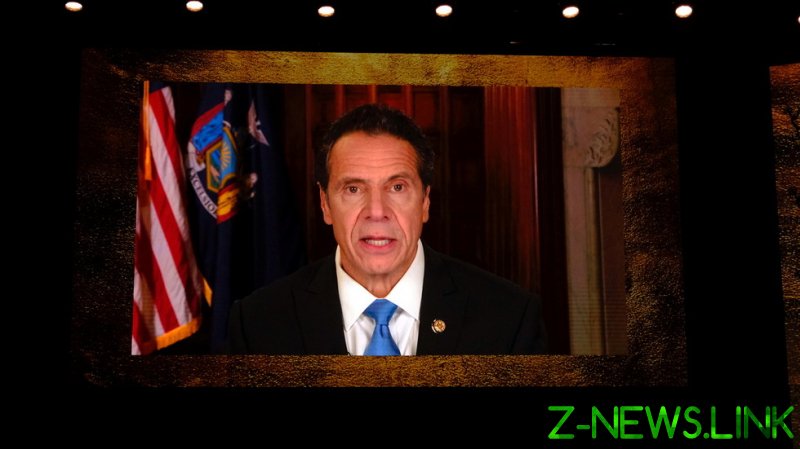 Signed into law on Tuesday, the new bill bars anyone from selling or displaying “symbols of hate” on New York state property unless the symbol appears in a book, “digital medium,” or within an educational context. The definition of “symbols of hate” is left deliberately open-ended, with the legislation noting that it “shall include, but not be limited to, symbols of white supremacy, neo-Nazi ideology or the battle flag of the Confederacy.”

Cuomo praised the legislation, declaring the US was facing a “pervasive, growing attitude of intolerance and hate,” and hailed the effort to “help safeguard New Yorkers from the fear-instilling effects of these abhorrent symbols.” He winkingly acknowledged that “certain technical changes are necessary” in order for the bill to comply with the First Amendment, all but admitting to violating New Yorkers’ free-speech rights just weeks after the Supreme Court reprimanded him for violating their freedom of religion.

While borderline-meaningless on its surface – New York, located several states north of the Mason-Dixon Line, isn’t known for residents’ affinity for the Confederate flag – the legislation is positively bristling with ulterior motives. It’s a simple matter to hold up something unpopular among the majority of the population – “white supremacists,” say – and then expand the definition to include conservative politicians, academics who don’t believe math and science are racist, even white liberals whose political priorities don’t include racial self-flagellation. The disgust directed at the original term thus envelops these “guilty by association” groups as well, even if the association is entirely fictional.

The precedent this ban sets – allowing the government to restrict speech by private individuals on public property in defiance of the First Amendment – is the proverbial foot in the door, and suggests the governor has other ‘hate symbols’ in mind he’d like to ban. Given the absence of a legal definition – either in this bill or in US law – for “hate speech,” Cuomo could declare whatever he pleases a “hate symbol” and criminalize its public presence.

Cuomo is no stranger to this tactic. Even as the Covid-19 pandemic was starting to take hold in New York, he was bloviating on behalf of his Israeli lobby donors about how the real “virus” was antisemitism. While it’s a no-brainer to oppose antisemitism, the term has become almost absurdly elastic in recent years, used to smear everyone from opponents of the Israeli government to critics of international banking cartels.

The governor has long conflated the Boycott, Divestment and Sanctions (BDS) movement, which uses economic pressure tactics to attempt to force Israel to comply with international law, with anti-Jewish bigotry, signing an unconstitutional executive order to create an anti-BDS ‘blacklist’ way back in 2016.

His weaponization of antisemitism allegations has only metastasized since then, and it’s absurd to think this latest law won’t be used to target critics of Israel – and/or Jews themselves. As the governor has made clear with his administration’s heavy-handed targeting of the Orthodox community during the pandemic, brown-nosing AIPAC during campaign season does not translate to standing up for Jewish rights. Somehow, targeting these communities for special enforcement isn’t considered antisemitic, but speaking out against US tax dollars being used to fund other countries’ war crimes is.

Cuomo is no friend to democracy, as his metamorphosis into one of the Covid-19 pandemic’s worst petty tyrants has proven. Indeed, the governor’s mention of ‘fear-instilling symbols’ in his praise of the new legislation was particularly rich, given his own admission that the state’s seemingly arbitrary zoned shutdowns are a “fear-driven response.” When he declares war on Americans’ essential freedoms, he means it. Anyone who thinks he’ll stop at banning the sale of Confederate flags at state fairs that don’t sell them to begin with is kidding themselves – and turning a blind eye while Americans’ rights are crushed under a dictator’s boot.