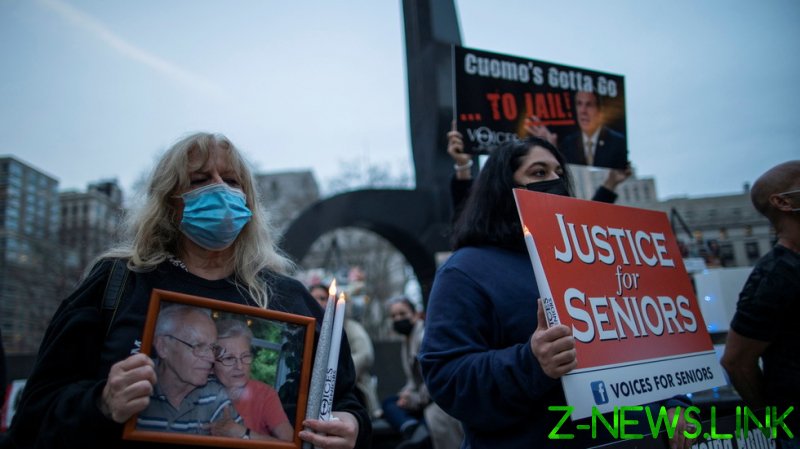 Cuomo’s aides “repeatedly” overruled the Department of Health over at least five months, the New York Times claimed on Wednesday, calling it a “sustained effort” to “obscure the pandemic death toll” and citing “interviews and newly unearthed documents” as evidence.

A scientific paper showing the true death toll was never published. Two draft letters sent to Cuomo’s office for approval were never sent to state lawmakers, either. Meanwhile, Cuomo was pitching and writing his book, ‘American Crisis: Leadership Lessons from the Covid-19 Pandemic’ with the help of aides.

The official report on deaths in nursing homes and long-term care facilities was published in early July 2020 and claimed only 6,000 deaths were recorded there, citing staff as the most likely source of infections and insisting that admissions from hospitals – under Cuomo’s own executive order – “were not a driver of nursing home infections or fatalities.” The report was “rewritten several times by senior advisers” to Cuomo, the Times wrote.

A different version of the study, authored by multiple health officials and intended for scientific publications, also reached that conclusion – but noted problems with the methodology and put the number of Covid-19 deaths at 9,739 through the end of May.

Though this meant approximately 35% of New York’s Covid-19 deaths were nursing home patients, the original report allowed Cuomo to claim that figure was only 21%, which made New York look good in comparison to the rest of the US. Unlike New York, however, other states counted nursing home residents who died in hospitals. The official excuse from Cuomo’s office has been that they didn’t want to “double-count” the deaths.

The Times report shows Cuomo’s aides working to apparently suppress information that didn’t fit their narrative, even as they assisted the governor in pitching and writing his book on leadership during the pandemic. However, a lawyer representing Cuomo’s office – the executive chamber – says the staff had “nothing to do” with the book.

“The whole brouhaha here is overblown to the point where there are cynical suggestions offered for the plain and simple truth that the chamber wanted only to release accurate information that they believed was totally unassailable,” Elkan Abramowitz told the Times. They were “never satisfied” that the numbers they were getting from the department of health were accurate, he added.

Earlier this month, New York Attorney General Leticia James launched a probe into whether Cuomo violated laws that restrict officials from using public resources for personal benefit. Cuomo’s spokespeople have acknowledged that staff members helped with the book, but insisted the work was done on a voluntary basis on their personal time.

The Times story quotes emails from Cuomo aide Melissa DeRosa, the same person who in February admitted that the governor’s office denied data to New York lawmakers so as to avoid giving ammunition to the Trump administration. The New York legislature is dominated by Cuomo’s fellow Democrats.

The Times noted that the request from the Justice Department that caused DeRosa and her colleagues to “freeze” pertained to only a few dozen of New York’s 600-plus nursing homes that were publicly run.

The paper also quoted a draft letter signed by Dr. Howard Zucker, the state health commissioner, which mentioned the figure of 9,835 nursing home deaths as of October 30. It was forwarded to Cuomo’s office for review, but never sent to lawmakers.

Cuomo has also been accused of inappropriate behavior by several women. He insists he has done nothing wrong, and has refused repeated calls to resign. He is currently presiding over the weekly coronavirus calls with governors of other states, which President Joe Biden never joined and Vice President Kamala Harris attended only once.