Cuomo declares Covid-19 measures over, praises rule-following constituents after 70% get at least one vaccine shot 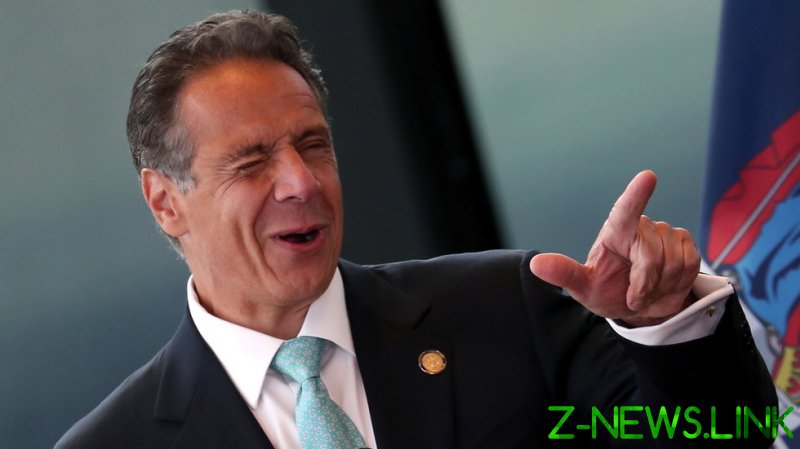 “If you said to us on day one, at the beginning of Covid, that we would be capable of what we have done, no one would believe it,” Cuomo said, adding that the state now boasts the country’s “lowest Covid positivity rate.”

Hyping the state’s broad obedience to his executive orders, during which 70% of residents received at least one dose of the three vaccines approved for use in the US, the governor declared that business as usual could return on Tuesday. Offices, sporting events, manufacturing sites, malls and child care businesses are free to open their doors once again, Cuomo announced.

Not only can businesses reopen, Cuomo said, but capacity restrictions will be repealed, as well as mandatory health screenings, which were required before entering certain establishments. The previous capacity rules were controversial, namely for religious groups who were barred from attending worship services, some of whom sued the governor over the restrictions earlier this year. It remains to be seen whether the groups will hail Tuesday’s move as a victory, or slam it as too little, too late.

While Cuomo promised to treat restive New Yorkers with bread and circuses in the form of fireworks displays in several of the state’s largest cities, the spectacles are unlikely to pacify those who were left out in the cold by the stimulus packages, or who lost their home or business after falling through one of the holes in the Trump and Biden administrations’ hastily constructed safety net, detractors noted.

“I’m thinking about all of the elderly who you sent to nursing homes to die,” one commenter seethed. “They won’t be watching fireworks.”

And while many would argue children are the least risk-prone of all age groups for Covid-19, the overarching mask requirements imposed by the Centers for Disease Control will still be in effect for pre-K to grade 12 schools as well as for large-scale indoor venues.

Mass transit, homeless shelters, prisons, nursing homes and healthcare facilities have also fallen under President Joe Biden’s ultra-strict mask mandates, which the president appears unwilling to lift anytime soon. Those who are unvaccinated will also have to wear a mask under the CDC guidelines.

The announcements were accompanied by a self-congratulatory reception held by Cuomo, who is currently fielding a handful of sexual harassment suits.

While Cuomo has faced backlash for the state’s disastrous nursing home policies amid the Covid-19 crisis, the governor did not mention his policy’s alleged victims or the tens of thousands of nursing home patients during the celebratory address.

While some warned the governor was moving too quickly to reopen, others insisted that he had effectively aided and abetted in the homicides of New Yorkers, especially elderly people in care homes, even as a military hospital ship sat anchored in the harbor largely unused and the Javits Center field hospital languished nearly empty.

A 242-page report by the New York State Bar Association’s Task Force on Nursing Homes and Long-​Term Care, which was appointed to review the pandemic response, concluded last week that Cuomo’s directive for nursing homes to admit Covid-19 positive patients “did lead to some number of additional deaths.”

Cuomo, a Democrat, has been governor of New York since 2011, and despite his legal issues has no plans to step down for the next election. His father Mario Cuomo also held the governor role, albeit for three years.