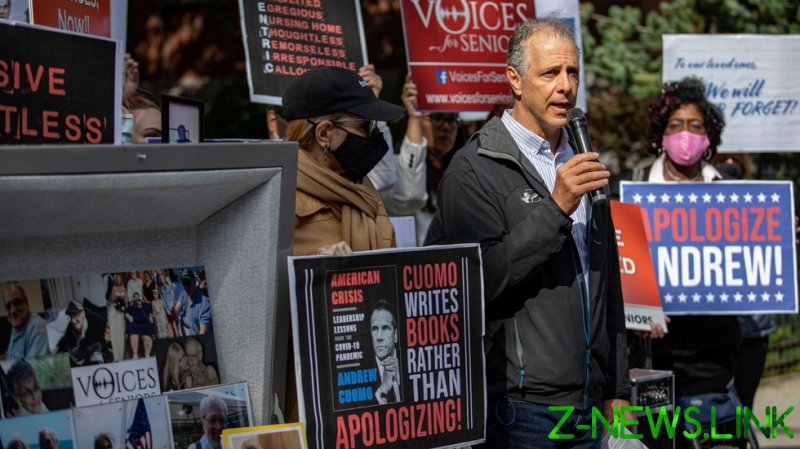 Theatrical protests and hashtags such as #CuomoKilledGrandma have proliferated ever since New Yorkers learned their governor was behind the homicidal nursing home policy that ordered New York’s elder care facilities to fling open their doors to ultra-contagious Covid-19 patients returning from hospital.

Cuomo proceeded to blame everyone but himself for the policy – the Trump administration, care home workers who’d supposedly brought the virus into the facilities in some sick parody of “take your child to work day,” even nursing homes themselves, which he blamed for not opposing his own order.

That dissembling worked to silence the media establishment, helped by Cuomo’s own brother (and CNN anchor) Chris, who ensured his employer would never hold his brother’s feet to the fire. Especially after Chris himself tested positive for the virus, few dared to publicly question his brother’s priorities in the fight against the pandemic.

But New Yorkers, especially those who lost loved ones in the mess the governor had made of the state health system and those whose businesses were unilaterally ordered closed, were not pacified by the familial drama, the bots promoting their governor on Twitter with vomit-worthy hashtags such as “#Cuomosexual,” and other distractions.

Cuomo, a second-generation New York politician, has never apologized, understanding that once he sets foot on that slippery slope, he might actually end up being held accountable for years of mismanaging New York’s healthcare system. His austerity-driven policies have cut 20,000 hospital beds, shuttered several facilities, attempted to bridge gaps in care with dodgy temp agencies, and generally made it clear to aging New Yorkers that they’re better off spending their golden years in Florida, if they want to live very long. And heaven forbid he opens the can of worms that would be apologizing for killing hundreds of thousands of small businesses.

But on Thursday, things began to change. A top Cuomo aide reportedly did the unthinkable and apologized. Not to the relatives of the 15,049 dead nursing home residents, the existence of half of whom the state had hidden under the heading of ‘hospital deaths’ until earlier this month, or those plunged into poverty by the shutdown orders, of course. But to fellow Democratic politicians for keeping them in the dark about the up-to-the-moment lies the administration needed to get the Justice Department off their backs in August.

Secretary to the Governor Melissa DeRosa delivered this rare apology to fellow Democrats, in a video conference call seen by the New York Post, for refusing to supply the death numbers to the legislature back then, explaining that “right around the same time, [Trump] turns this into a giant political football.” Blaming Trump, of course, had been Cuomo’s go-to since day one, as all eyes were on New York – the focus of the pandemic for months – and the general “Orange Man Bad” sensibilities of liberal New Yorkers were usually enough to keep him covered.

“[Trump] starts tweeting that we killed everyone in nursing homes,” DeRosa continued, glossing over that accusation’s stunning resemblance to reality, “[and] directs the Department of Justice to do an investigation into us.”

That wouldn’t be a problem for a law-abiding administration, but Cuomo’s secretary, aware her boss wasn’t running one of those, acknowledged to the politicians on Thursday’s call that “basically, we froze. Because then we were in a position where we weren’t sure if what we were going to give to the Department of Justice, or what we give to you guys, what we start saying, was going to be used against us while we weren’t sure if there was going to be an investigation.”

Translation: “We weren’t confident in our ability to keep our stories straight.” Queens Assemblyman Ron Kim agreed with that interpretation, telling the Post it seemed “they were trying to dodge having any incriminating evidence that might put the administration or the [Health Department] in further trouble with the Department of Justice.”

But there was a happy ending, DeRosa told the callers. The DOJ “never formally opened an investigation….They sent a letter asking a number of questions and then we satisfied those questions, and it appears that they’re gone.” She apologized to the politicians, acknowledging the “position that [they] were put in” was “not fair.”

The Cuomo administration will never apologize to New Yorkers, however – not just those whose loved ones died in nursing homes, but the hundreds of thousands who’ve been put out of work by scientificallyquestionableshutdowns that have turned New York City into a wasteland. However, a bipartisan group of New York politicians seem to have finally woken up to the injustices being perpetrated on their constituents by the unaccountable governor, and members of both parties are demanding a probe of the Cuomo coverup.

If real justice is to be delivered, it should not stop at nursing homes. The probe should shine a light into every nook and cranny of the rotten edifice of the Cuomo administration, including its unilateral decision to pack up and give away the school and healthcare systems to the governor’s favorite billionaires while gifting the bankrupt businesses it destroyed to his private-equity cronies. New York may be known for political corruption, but it must draw the line somewhere.