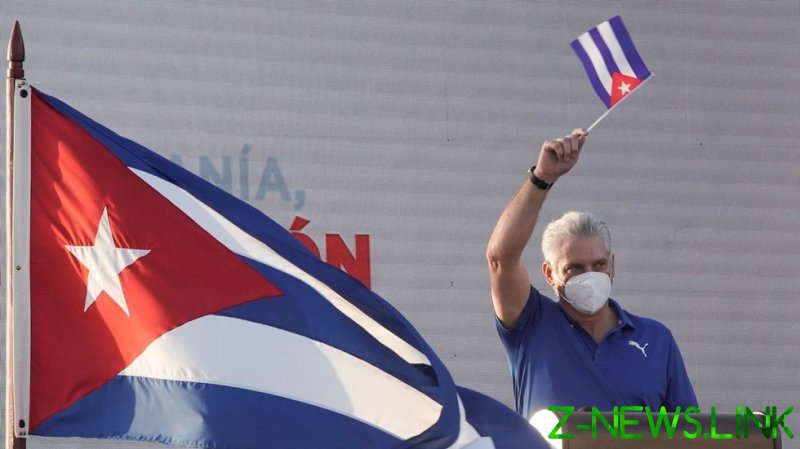 Speaking to thousands of supporters in Havana on Saturday, Diaz-Canel claimed the narrative that there is widespread unrest in Cuba is a false one. He was joined by former President Raul Castro, 90, while he addressed supporters.

The ‘lie’ being pushed through viral social media images and foreign politicians and activists is not “by chance or mistake,” Diaz-Canel said.

“All this is the cold calculation of an unconventional war manual,” he claimed. The president had previously blamed the protests on “foreign meddling,” pointing to the US as the likely culprit behind the demonstrations.

He also blasted ‘media terrorism’ against Cuba funded by the Washington and Florida political machine, according to Cuban news agency Prensa Latina.

Diaz-Canel put social media networks in his sights, too, saying they “encourage and glorify the outrage and destruction of property” and contain an “overflowing of hatred.”

“Born to conquer and not to be conquered!” the crowd shouted at the president’s rally, according to local reports.

Diaz-Canel’s speech comes only days after the political demonstrations, which were the biggest in decades in Cuba. Citizens gathered in dozens of cities and called for an end to the president’s leadership, demanding better access to food and medicines. Images and footage of the massive crowds, as well as clashes with police, quickly garnered worldwide attention.

One person reportedly died over the course of the protests, and over 100 were arrested.

US President Joe Biden made it a point this week to condemn Cuba’s government, calling them a “failed state.” He added that he was considering helping Cuban citizens with getting internet access “reinstated” and less restricted, though he did not detail how it would be accomplished or what the ramifications could potentially be. Biden’s words leave little hope for the US lifting sanctions on Cuba, which have significantly contributed to the country’s economic woes.

Diaz-Canel previously responded to Biden’s comments by naming the US as the actual failed state. In a lengthy Twitter thread, he called for America to pull back its sanctions and blasted the country for having “a shameful record of wars and violence; brutal repression and killings of citizens by the police; racism and human rights violations.”

Internet access was also cut off for days in Cuba following the demonstrations, though it has been restored with some restrictions in place.

Diaz-Canel posted images of the large crowd gathered on Saturday – similar rallies were held in other cities – and said Cuba “will never be a land of hatred” and will be independent.

While the president drew a large crowd, there was at least one dissenter. AFP reported that police arrested a man ahead of the rally for shouting ‘Patria y Vida’ (‘Homeland and life’), a protest rap song popular among the Cuban government’s critics. The phrase itself is an inversion of ‘Patria o Muerte’ (‘Homeland or death’), one of the slogans of the Cuban Revolution.