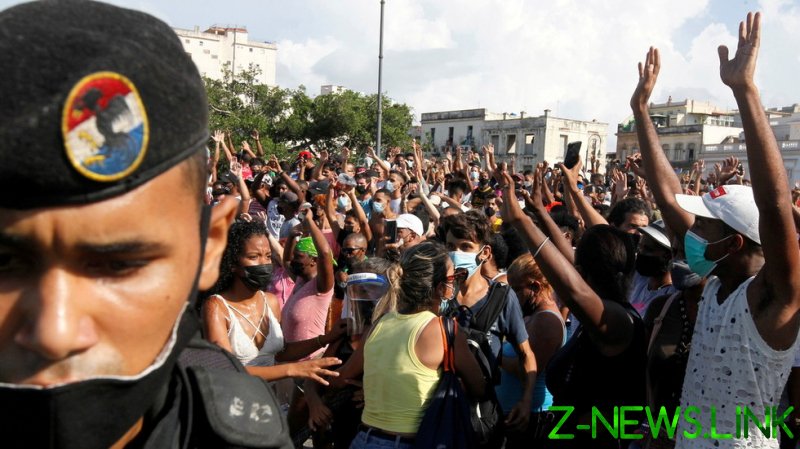 A man identified as Diubis Laurencio Tejeda, 36, was killed by Cuban security forces during a demonstration on the outskirts of Havana on Monday, according to Granma, an official organ of the Cuban Communist Party. Several other protesters and police officers were also injured in the clashes.

The Interior Ministry said it “regrets the death of this person,” adding that the man was killed as authorities tried to maintain “internal order” and that an investigation had been launched into the incident.

The state-backed outlet reported that “organized groups of antisocial and criminal elements” gathered in Havana’s Arroyo Naranjo district and attempted to march toward a nearby police station “with the aim of attacking officers and damaging the facility.”

The demonstrators were intercepted by officers with the Interior Ministry before they reached their destination, at which point clashes erupted, with protesters reportedly wielding “stones and blunt objects.” They were also said to have “vandalized homes,” damaged power lines and set a few small fires during the encounter.

A number of arrests were also made, Granma reported, though exactly how many remains unclear.

Tejeda’s is the first confirmed death linked to a recent wave of anti-government protests, which kicked off in earnest on Sunday, when large crowds took to the streets of Havana and other cities to demand urgent action on food, medicine and power shortages, among other complaints. Chants of “Liberty!” and “Cuba is not yours!” have become popular slogans amid the demonstrations, with some protesters also demanding an end to communist rule on the island.

Opposition groups claim that more than 100 arrests have been made since Sunday, alleging that protesters, journalists and other activists had been targeted. Spain’s Foreign Ministry has also said Spanish reporter Camila Acosta was swept up in the arrests, though the Cuban government has so far offered no specifics on arrests made or injuries sustained during the rallies.

Cuban authorities have pinned the protests on foreign meddling, with President Miguel Diaz-Canel accusing Washington of pursuing a “policy of economic suffocation to provoke social unrest,” referring to decades of US sanctions imposed on the country. Foreign Minister Bruno Rodriguez went even further, claiming “US-financed mercenaries” helped to fuel the anti-government demonstrations.

US welcomes Cuban unrest, but not sea-borne refugees

As unrest grips parts of Cuba, Washington has aired concerns about citizens attempting to flee to the US, even while vocally backing the protesters. On Tuesday, Department of Homeland Security chief Alejandro Mayorkas warned that Cubans who try to reach the US by crossing the ocean would be turned away.

“Let me be clear: If you take to the sea, you will not come to the United States,” he told a news briefing, adding that the Coast Guard is monitoring the border and is prepared to deal with any surge in migration.

The DHS chief also told reporters on Monday that 20 people had died attempting similar sea voyages in recent weeks, saying “Our priority is to save lives.” The same no-entry policy applies to everyone, “regardless of their nationality,” Mayorkas went on, including Haitians fleeing unrest in their own country. The Caribbean nation is in the middle of a major political crisis after President Jovenel Moise was assassinated by a group of gunmen last week.