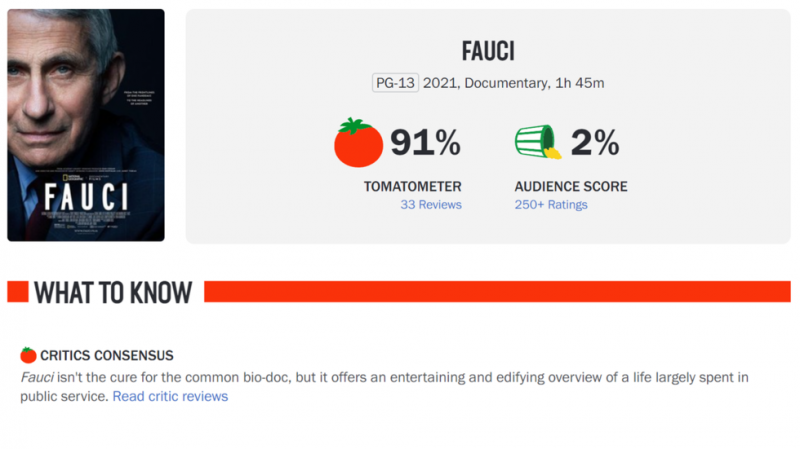 National Geographic’s ‘Fauci’ has been playing in select cinemas since September 10 and premiered on the Disney Plus streaming service last week. Trailers for the film focus heavily on Fauci and his work combating Covid-19, during which time he has become one of the more controversial figures in American politics.

The film, however, takes a positive look at Fauci and focuses more on tales about the health figure from his family, as well as public figures the infectious disease expert has worked with in the past, such as U2 frontman Bono and former President George W. Bush.

On Rotten Tomatoes, which aggregates reviews from selected critics and then gives a ‘rotten’ or ‘fresh’ score, the film holds a 91% positive rating, based on 30 positive reviews and three negative. The rating from audience members, however, was conspicuously missing from the website until Monday. As of Sunday, only one review, which was negative, had been posted despite the film being out for weeks.

The site was accused of ‘hiding’ the audience score in an effort to spin the movie’s increasingly negative coverage.

On Monday, an audience score did appear, and it showed valleys of difference in opinion from critics to the audience, with users awarding the film a 2% average from over 250 ratings (though it began with a 4% rating that has continually dropped). Despite the average now showing, there is still a lack of actual user reviews on the site, though many users may have chosen to simply drop a rating instead of writing a review.

“Two Americas,” writer Josh Jordan tweeted, including a screenshot of the ‘Tomatometer’ for ‘Fauci’ along with the recently-released comedy special from Dave Chappelle, which has been labeled transphobic by critics, but has been a popular title on Netflix. Critics on Rotten Tomatoes gave the movie a ‘rotten’ score of 33% while audiences awarded a near perfect score.

Fauci critics were quick to mock the film’s near-universal panning from audience members.

The Rotten Tomatoes score for ‘Fauci’ is just the tip of the iceberg when it comes to negative reviews. On IMDB, the movie has a 1.5 rating from over 6000 users.

Trailers for the movie on YouTube haven’t fared much better. One posted by National Geographic has over 100,000 ‘dislikes’ and less than 8000 ‘likes’, as of this writing.

Rotten Tomatoes has been accused of bias in the past, and the company has often chalked up near-universal negative reactions from audiences to trolls’ review-bombing.

In 2019, the company disabled pre-release comments and removed their ‘Want to See’ function – which allowed ratings based on how excited users were for a film – in response to early backlash against franchise pictures accused by critics of going ‘woke’, such as ‘Star Wars: The Last Jedi’ and ‘Captain Marvel’.

Two years before that decision, debate around Rotten Tomatoes and the political influence the audience can have was still a heated debate. Outspoken liberal and comedian Amy Schumer claimed in 2017 that her comedy special ‘The Leather Special’ was review-bombed by the “alt-right” over her comments on Donald Trump and other Republicans (50% critic rating/4% audience). At the time, the site responded again by limiting user functions by removing a five-star system in favor of a positive or negative rating from audiences.

On the opposite end of the spectrum, conservative artists have often pointed to the fact that films aimed at right-leaning audiences often score much lower with critics than audiences as proof the company is more open to ‘certifying’ liberal critics than right-of-center or conservative ones.

Producer John Aglialoro blamed near-universal bad reviews from “hateful” critics  on Rotten Tomatoes for his 2011 film ‘Atlas Shrugged: Part I’ struggling to find an audience in theaters (he would go on to produce two sequels covering the last two thirds of Ayn Rand’s influential novel).