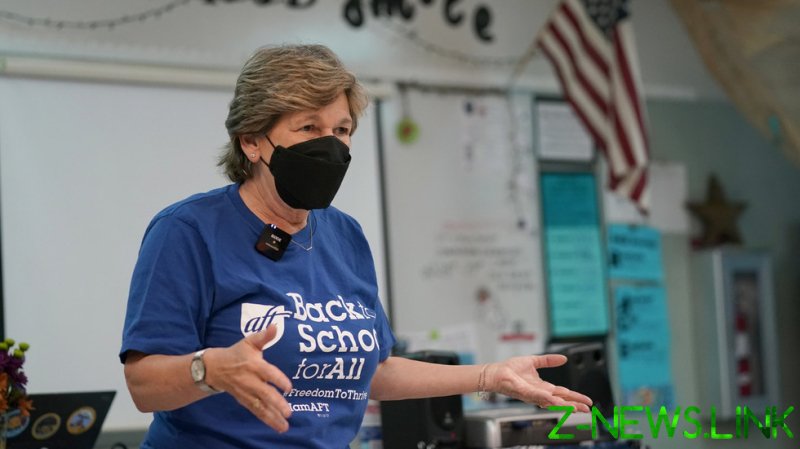 Randi Weingarten, the president of the American Federation of Teachers (AFT), was accused of hypocrisy for not wearing a mask during an event she attended earlier this week in Puerto Rico.

She and several other visiting officials speaking at the annual Somos conference addressed a “packed room” without wearing masks.

This appeared to violate the health guidelines of the US unincorporated territory, which requires face coverings to be worn in all indoor public spaces, regardless of vaccination status.

Weingarten, an outspoken advocate for mask mandates at schools, was confronted about photos from the conference on Twitter on Saturday.

She said people attending the event needed to have proof of vaccination and that she personally had a fresh negative Covid-19 test, but acknowledged the criticism was fair.

“I think you are right. If kids are wearing masks in schools to protect themselves & others educators must wear masks inside as well. I’m sorry,” Weingarten tweeted.

The official said she usually wore masks indoors, including during “the rest of the conference” and that she and other speakers “took them off as people were having a hard time hearing us.” The room was big and the audio system was bad, she explained.

The thread was bombarded with negative responses from anti-mandate campaigners, teachers who said they didn’t get to bend the rules like Weingarten did when in classrooms, and others displeased with her remarks.

AFT, the union that Weingarten leads, is the second-largest in the country, with some 1.7 million members. Other visiting speakers at Somos included Betty Rosa, New York City’s commissioner of education, and Meisha Porter, the chancellor of the city’s Department of Education.

The event was briefly disrupted by protesters, who decried Rosa for the role she plays in imposing austerity measures on Puerto Rico. She is a member of the Financial Oversight and Management Board, colloquially known as La Junta, installed by the US government to supervise the commonwealth’s budget. One of the protesters wore a voucher mask that covered his entire head.