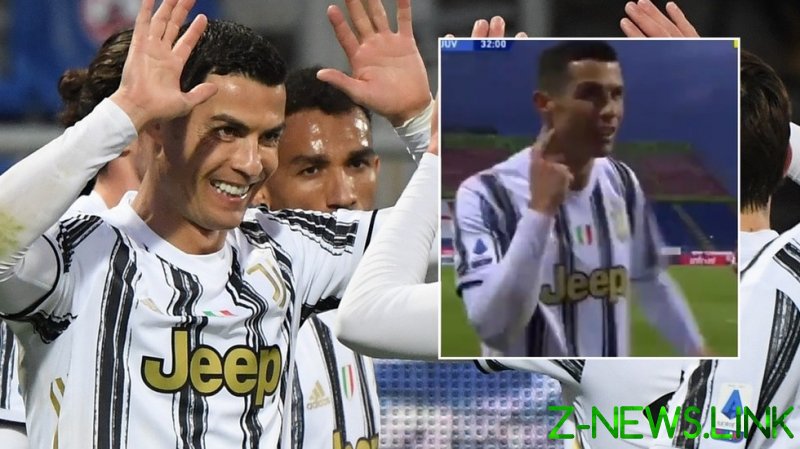 Ronaldo struck first after 10 minutes, rising highest to head in a Juan Cuadrado cross. The Portuguese star doubled his tally 15 minutes later as he converted from the penalty spot after he had been brought down by Alessio Cragno inside the box.

The 36-year-old star completed his hat-trick in style in the 32nd minute, cutting inside his marker to rifle into the top left-hand corner of the net.

“The celebration tops it off,” wrote one fan as Ronaldo was seen running to the camera and pointing at his neck after sealing his treble.

The hat-trick was a statement of intent after a week in which Juventus and their five-time Ballon d’Or winner suffered more woes in the Champions League as they crashed out to Porto on away goals at the last-16 stage.

That sparked more rumors over Ronaldo’s future as he was linked with a summer return to Real Madrid.

Reports in Spain claimed that Ronaldo’s agent Jorge Mendes had already been in touch with his client’s former employers, ahead of a potential return to a stomping ground where he became Los Blancos’ all-time top-scorer on the way to helping them to four Champions League titles.

Ronaldo himself issued a message on Instagram on Saturday, in which he appeared to restate his commitment to the Juve cause, at least in the immediate future.

After Ronaldo’s latest heroics, fans and pundits paid tribute to his determination to bounce back in style.

Cagliari pulled a consolation goal back in the second half through Giovanni Simeone but it wasn’t enough as Ronaldo and Juve claimed a 3-1 win.

However, despite his tally some fans still found time to slander the Portugal star, accusing Ronaldo of going missing in the crunch ties with Porto, only to turn up against a lowly Cagliari team who are 17th in the Serie A table.

“Ronaldo ghosting against a 10 man Porto in the CL but will do this celebration after scoring against 17th place Cagliary,” mocked one fan.

Alongside their exit from Europe, Juve are facing an uphill battle to retain the Serie A title they have won for the past nine seasons.

Sunday’s win lifted Pirlo’s men to 10 points behind leaders Inter Milan, although the Turin giants have a game in hand.

Ronaldo’s strikes took him to 23 goals in 23 Serie A games for the season, leading the way in the Capocannoniere stakes ahead of Inter’s Romelu Lukaku, who has 19 strikes to his name.

The hat-trick was also the 57th in the Portugal star’s career, and was the second fastest behind his treble against Espanyol in 2015, which came inside just 20 minutes.