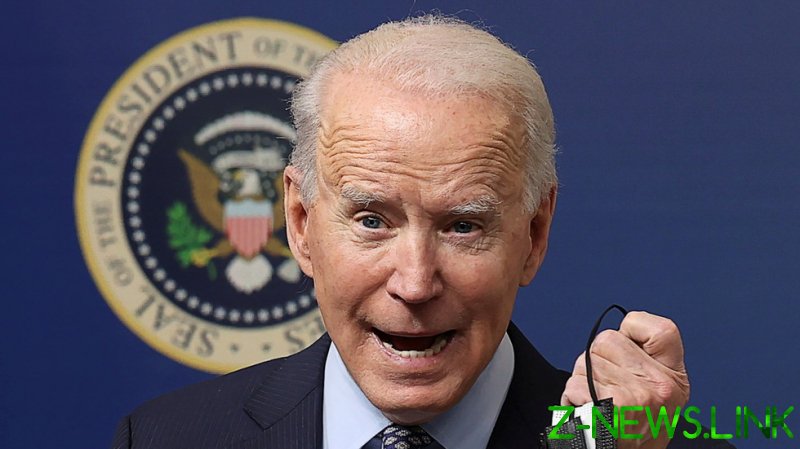 Other priorities – such as providing promised economic relief from the Covid-19 pandemic or otherwise doing anything that actually helps anyone on Main Street – haven’t gone so well, but fear not: The White House website finally has the decency to inquire about your preferred pronouns on its contact form.

This and other groundbreaking advances in the way the federal government communicates were hailed Wednesday in a New York Times article praising Biden for quickly replacing that obviously mean and harmful “Trump lexicon” that was holding us back for so long. For instance, references to “tribal” people now must be capitalized, as “Tribal” people. Words and phrases that former President Donald Trump failed to promote, such as “climate” change and anything to do with the LGBTQ agenda, are “popping up everywhere.”

The Bureau of Land Management (BLM) hasn’t yet been renamed, despite its inconvenient use of an acronym that’s now the property of a much more favored organization, but it has been given an image makeover. That picture on its website showing a big wall of coal – which might have seemed appropriate, given the BLM’s role in managing minerals development on federal lands  – has been replaced with a pretty landscape shot.

More importantly, Biden has banned the term “illegal alien.” Those folks are now called “noncitizens,” though the president is working fast to change their status to “citizen/reliable Democrat voter.”

The New York Times failed to mention another key language tweak in the immigration space. When somebody noticed that the government is still incarcerating unaccompanied minor “noncitizens” at the border – remember when Bad Orange Man put children in “cages,” which no one wanted to admit were initially deployed by the Obama-Biden administration? – White House press secretary Jen Psaki replaced those mean-sounding words by explaining that the kids were being held in “facilities” with “Covid-safe standards.”

It didn’t matter that Biden and Vice President Kamala Harris campaigned on a vow to overturn the “human rights abuse” perpetrated by the Trump administration in putting children in “cages.” Biden, in fact, reopened a holding facility that housed unaccompanied migrant children in shipping containers. But Psaki explained that it would be “inhumane” to not put the children in such confinement.

“This is not kids being kept in cages,” Psaki argued. “This is a facility that was reopened that is going to follow the same standards as other facilities.”

The problem is, euphemisms and feel-good language won’t change the objective reality on the ground. The children will feel no less incarcerated, just because they’re being held by Biden’s administration rather than Trump’s. They will be no less used and abused by their parents and other exploiters.

And Biden will be no less of a deceiver and promise-breaker than he actually is. Biden knew it was necessary to segregate and detain unaccompanied minors at the border, rather than housing them with adult migrants, for their own safety. That’s why the government built such “facilities” when he was vice president. But feigning outrage when Trump did the same fed the Democrats’ race-baiting narrative. Nevertheless, using the same “facilities” for the same purpose “is not a replication” of Trump’s policy, Psaki insisted. “Certainly not.”

That’s the beauty of controlling the executive branch, both houses of Congress, the mainstream media, academia and Hollywood. You get to author an alternative reality, and everyone pretends that it’s true.

Therefore, January 6 will live in infamy as the day when the Hitlerian leader Trump incited a white-nationalist “insurrection” at the US Capitol. Five people were killed, and members of Congress narrowly escaped a Jacobin-like bloodbath.

Democrats and their media mouthpieces are writing the history of the Capitol riot, er, insurrection right now. They have an agenda to advance, including disparaging Trump supporters as domestic terrorists, so that’s how the story will be remembered.

Biden’s failures to keep his promises or help Americans also won’t matter. Hateful Republicans will be blamed for standing in the way of Covid-19 relief payments, even though Democrats have ensured further delays by larding their $1.9 trillion bill with a wish list of partisan goodies, such as $1 billion to fund “racial justice” for farmers and $10 million to help preserve Native American languages.

Hundreds of thousands of businesses have been destroyed by Covid-19 lockdowns, the people are the most divided they’ve been since the Civil War, and Americans can’t even count on having potable water or reliable electricity service.

With Biden fixated on pronouns and other virtue signaling at a time like this, one might liken the situation to Nero fiddling as Rome burned. But Nero is remembered that way – unfairly so, according to some historians –  because he wasn’t the victor. He was a populist who was loathed by the Roman elites, which might sound familiar, and he committed suicide after being condemned by the senate as a public enemy.

Or at least that’s the way history tells the end of his story. Today’s newspaper of record and other authorities have a more feel-good tale for Biden.