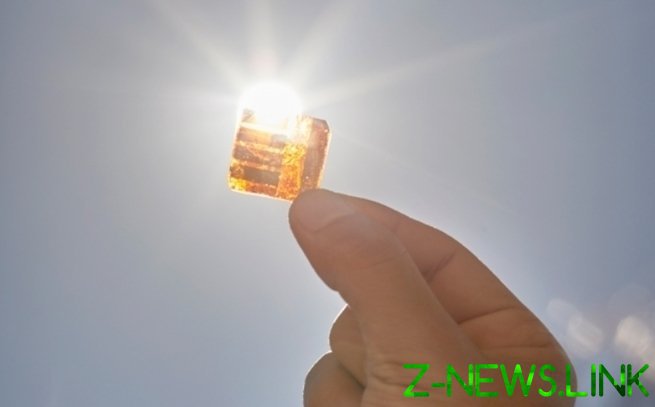 Perovskites – a group of materials with similar crystalline structure that can compete with traditional silicon solar panels due to the flexibility, low cost films and the relative simplicity of the production process. However, there are still some features of the structure and potential effect of the replacement of such solar cells of some other metals remained unclear.

Manufacturing process of silicon solar panels requires high temperature regime (1400° C) and complex equipment, while perovskite film produced at a temperature of only 100° C. the Equipment for their manufacture is inexpensive, in addition, the composition based on the perovskite can be applied to different surfaces, greatly expanding the scope of this photovoltaic element.

MIT scientists managed to decode a key aspect of the behavior of the perovskite depends on what components make up its formula. For perovskite objectively, there is the concept of the Golden mean: up to a certain point, some additives increase the performance of the solar cell, but the threshold value is exceeded, destroy it.

For all perovskites characteristic three-part crystal structure, where each part can consist of any valid elements – this feature determines the wide variability of components of perovskite foliaceus. This may be compared with an à La carte restaurant, where lunch consists of a first dish And the second category and the dessert category, each of which can be combined in any combination.

Until now, these “sets” of elements of the perovskite were completed by trial and error. For example, it was found that the addition of alkali metal in the perovskite increases the conversion of light into electricity from 19% to 22%, but did not understand exactly how this metal interacts with the other elements of the structure.

MIT scientists investigated perovskites using high-frequency synchrotron nano-roentgenofluorescence, prospecive material beams with a width of one-thousandth thickness of a human hair. So they found that alkaline metals such as cesium and rubidium to help the other components to work more smoothly through a kind of homogenization of the structure. The flow of electrons passes through the material easier, and performance perovskite film increases. However, this effect is observed only up to a certain concentration of alkali metal, or its molecules rearranged to form clots, it violates the conductivity of perovskite.

Although researchers have identified structural changes that occur in perovskite cells under addition of different metals, and the related changes in performance fully to understand their nature has not yet succeeded. Now it is the subject of ongoing research teams. According to scientists, the theoretical maximum efficiency perovskite solar cells is about 31 percent, and the best known result to date is about 23 percent, so there is a huge margin for potential improvement.

Before entering the commercial perovskite solar cells with similar efficiency may take a lot of time. But at least two companies are now creating production line, and it is expected that the sales of the first modules will begin in the next year or two. For example, Saule Technologies will release a small transparent solar cells from perovskite, intended for coating facades and other building surfaces.

Launched from Cape Canaveral in 1977, the probes Voyager 1 and Voyager 2 have been …