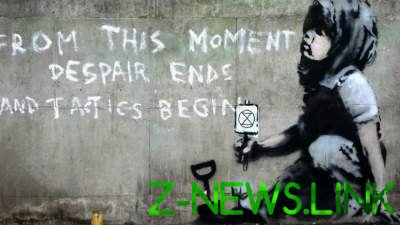 One of the most mysterious street artist of today Banksy spoke in support of eco-activists, creating new graffiti. The artist’s work appeared near Marble arch in London at the end of April.

It depicts a girl sitting near Rostock. She holds in her hands a plate with the emblem of the radical environmental movement Extinction of Rebellion (“Rebellion against extinction”). The inscription on the graffiti translates as “From this moment despair ends and begins with strategy.”

The message of Banksy to protect this eco-activists. The fact that over the last two weeks they have held several major events. In particular, blocked traffic in the district of Oxford circus, Waterloo bridge, the area near the Parliament and blocked the railway track. The result was that from April 15, police detained more than 1,100 participants in the movement.

By their actions, Extinction, Rebellion is trying to draw attention to the irreversible climate change and make the authorities to respond to the crisis.

Works by world-renowned street artist will always appeal to different political and social themes. Street art Banksy has become a reflection of the modern era. The artist makes fun of the consumer society, which is fixated on buying unnecessary stuff. The work of Banksy on the topics of outrage on the part of the fighters for the purity of the city walls, and sometimes even break out from the facades of buildings.

The Bristol artist name constantly appears on the front pages of Newspapers, but he still remains anonymous and hiding from the police. So it works, usually born late at night.

The work of Banksy is insanely expensive. And what of the fighter with the consumption of so much money? He donates them to charity. The underground artist has repeatedly provided assistance to the charitable organizations.