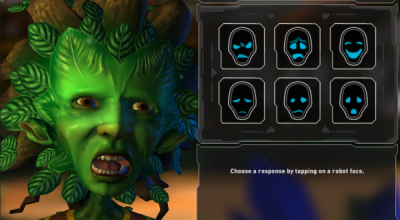 In the game they need to interact with representatives of extraterrestrial civilizations, based on the understanding of their feelings.

A group of American scientists from the University of Wisconsin in Madison, led by psychologist Tammy Kral, drew popular children’s hobby for good. The researchers were able to create a computer game whose main idea is to help people learn to understand the emotional state of others.

Empathy is a conscious empathy for the emotional state of another person without the loss of sense of external origin of this experience. Adolescence promises to the people, not only the visible physiological changes, and changes in psychological character. The psyche of the child begins forming in the adult, and because of the instability of their status of adolescents exposed to various disturbing conditions, which often leads to problems.

Crystals of Kaydor, that is, Crystals Kaydara – game, the essence of which is to develop empathic abilities of people. In the game the player will have to communicate with the aliens, other life forms that are not trained in human speech, but Express emotions like humans: gestures, facial expressions. The player needs to determine the test alien at the moment, the emotion to be able to react properly and work with him to complete the task.

The experiment a group of researchers attracted 34 teenagers aged 11 to 14, each of which played in Crystals of Kaydor for two weeks about 70 minutes a day. Was attracted too and the other control group are seeing teenagers who during this time played a different video game, Bastion, the purpose of which is to save the village after the cataclysm. All this time, researchers monitored the brain activity of subjects children using functional magnetic resonance imaging, paying close attention to the areas of the brain responsible for processing emotions, namely the rear cingulate cortex, medial prefrontal cortex and the amygdala.

The study became known that children playing in Crystals of Kaydor, the total activity of these areas increased, which was not observed in those who played another game. In addition, all subjects passed the test for empathy, and results of the first group were significantly higher than the second.

The scientists were pleased with the research, but said that the game helped to some Teens, and the result depends on the personal characteristics of each person, what they intend to thoroughly investigate in the future.