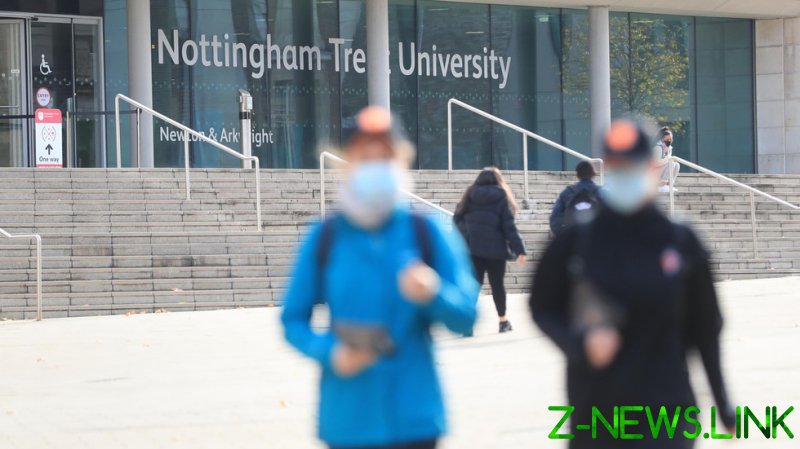 In Nottingham, where I live, people are angry and upset by the recent restrictions that have seen the city and the surrounding county placed into tier two of the government’s three-tier classification system to try to prevent the spread of Covid-19. Many locals are blaming Nottingham’s students for the rapid rise in cases that has caused this classification.

Nottinghamshire is a very typical, provincial part of the UK sitting in the middle of England. It’s too far away from the southeast to benefit from the crumbs that may fall off of London’s table, and not far north enough for the city itself to be considered as one of the great northern independent powerhouses.

However, given its size, Nottingham has always punched above its weight. While once heavily reliant on the mining and manufacturing industries, since deindustrialization it has reinvented itself as a great shopping destination, and as a city with an excellent night-time economy. It is home to two extremely successful and well-respected universities that draw in almost 70,000 students, making up 15 percent of the city’s population.

Manufacturing sites like the Raleigh cycle factory –  a proper Nottingham brand, born and bred – are a fading memory. Raleigh made bikes in Nottingham until the early 2000s, but production moved to South Asia. Now the site is part of the University of Nottingham campus, while Nottingham Trent University is located in the city center.

Consequently, the city relies heavily on the student population to keep the hundreds of bars, pubs, clubs and restaurants busy. However, the relationship between Nottingham’s local residents and the university students has never been a love-in. Rather, they tolerate each other by sharing the city’s resources, but on different nights. Locals do weekends, students go to exclusive nights for them during the week. Rarely the twain do meet and for decades, there has been a consensus regarding this arrangement.

However, Covid-19 has thrown the two communities together, and not amicably. The universities and the government have encouraged students to return to their places of study all over the country, which meant that during September hundreds of thousands of people moved around the country to live in very close proximity with each other. It is not surprising to anyone that this caused a catastrophic rise in Covid rates of infection, especially in student-heavy cities.

The story of Nottingham is not unique, as many of our deindustrialized cities have come to rely on universities as significant contributors to their economies. The universities also employ hundreds of local people, albeit mainly in service and low-tier admin roles. In short, the universities of the 21st century have become real sites of power within many cities.

Covid rates of infection in cities like Nottingham, Sheffield, Leeds, Newcastle, Manchester, and Aberdeen have doubled and even tripled around areas where students live, and in a matter of days as they are encouraged to be tested.

Nottingham’s infection rate doubled in a week and is now the highest per 100,000 in the country, with the average age of those testing positive in the 20s. And the local people of Nottingham have put two and two together and come up with exactly the right number: the recent rate of infection is being pushed sky-high by the students.

The consequence is that people are angry, very angry. Students are being blamed for being careless and selfish, using their city as a place to party and forgetting – or not caring – that for local people it is their home, where elderly, potentially at-risk family members live. Tensions are running high, with both vice-chancellors from the universities publicly asking people to stop blaming students.

The vice chancellors are right; local people are wrong to point the finger at students. It really isn’t their fault, and I have the greatest sympathy with them. As a lecturer currently teaching all of my courses online while many of my students in another city are quarantined in their halls of residences or in student accommodation within the wider community, I can see exactly how they are struggling with this situation.

They are mostly young people trying to deal with being away from their families in the middle of a pandemic, and many of them have symptoms and are scared. Let us also not forget that there are students from the local area, and they are extremely worried about their families and their wider community.

Let us squarely blame those who need to be blamed: the universities themselves, their top management, the vice chancellors and the government, who encouraged students to leave their homes and to return to their places of study. They clearly put tuition fees and accommodation fees before the welfare of their students and the local community. It’s also worth pointing out that the local councils did not speak loudly enough to the all-powerful universities, either.

In the 1970s, Prime Minister Margaret Thatcher wanted a revolution to curtail the power of the trade unions in the manufacturing industries in places such as Nottingham, Sheffield and the northeast. The Covid crisis has only confirmed we are ready for another revolution, but this time we need to focus on the power within the universities, and those highly paid vice chancellors.