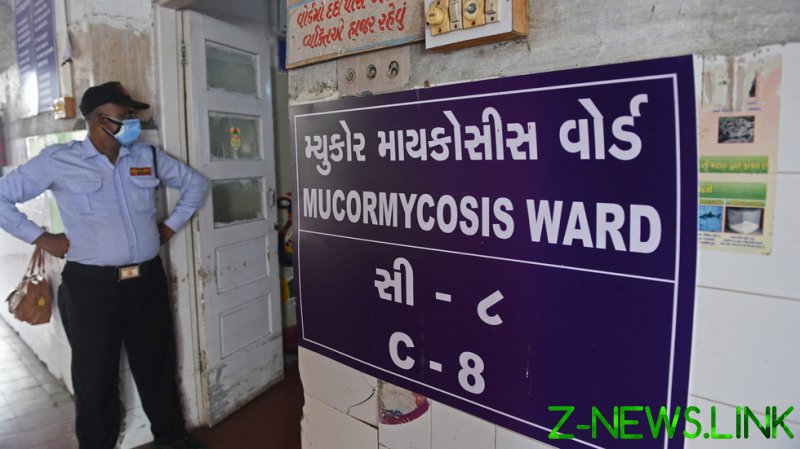 Kunwar Singh, 59, was a lawyer treated at a hospital in the city of Ghaziabad, located in the Indian state of Uttar Pradesh next to New Delhi. The man was first diagnosed with coronavirus earlier this spring, and then got infected with fungus, believed to be a complication of the virus, local media reported this weekend.

“The yellow fungus, besides white and black fungus, was detected during an endoscopy [last week],” his doctor, BP Tyagi, announced on Saturday, as quoted by India’s PTI news agency. Singh died of blood poisoning by toxins, according to the doctor.

Tyagi, who is an otolaryngologist, previously said the man was one of his first patients with all three types of fungus infection. He is currently treating another patient with yellow fungus, who also recently recovered from Covid-19.

“The fungus was detected near his brain. Half of his jaw has been removed,” he told PTI. The so-called yellow fungus, said to be more dangerous than black or white due to its hard to spot symptoms affecting internal organs, has previously not been reported in humans.

Meanwhile, black fungus, or mucormycosis, has recently been pronounced a notifiable disease under the Epidemic Diseases Act in the Uttar Pradesh state. In the city of Ghaziabad, some 65 patients have been diagnosed with fungal infections, all believed to be complications of Covid-19. There are nearly 2,000 active cases of the virus in the city, according to local media citing authorities.

While India has been battling Covid, with nearly 27.9 million confirmed cases and over 325,000 deaths, fungus cases have recently emerged. Several states declared it to be an epidemic, with officials saying there has already been nearly 12,000 cases of black fungus alone. The infections affecting vital organs have been reported among coronavirus patients who were treated for Covid-19 with steroids and prolonged oxygen support.