Covid-denying Russian monk, who insists Putin has been replaced by Antichrist in rubber mask, detained over child suicide claims 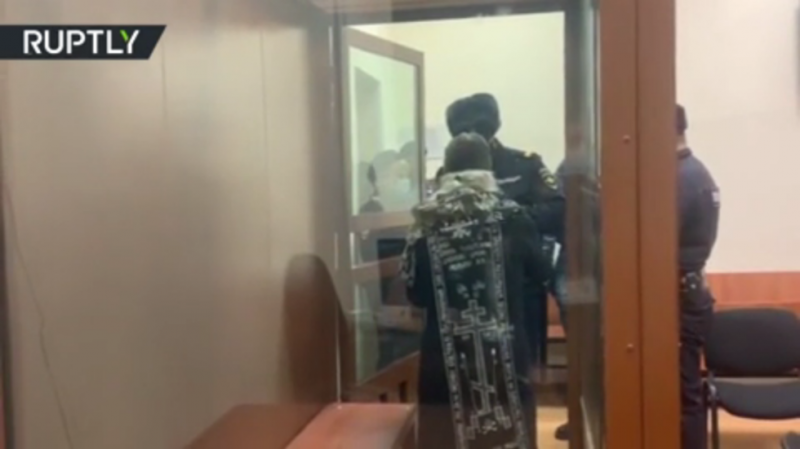 Local media in nearby Ekaterinburg reported on Tuesday that a police operation was underway at the Middle Ural Orthodox chapter, and Nikolay Romanov (known as Father Sergius) had been detained. Hundreds of supporters gathered near the road to the compound to protest the arrest of the faith leader, who has previously been formally excommunicated from the Church.

Some hours later, Romanov appeared before a Moscow court, which will determine whether he can be held or released. The media has been banned from the hearing.

While details of the charges have not yet been released, Romanov’s lawyer, Svetlana Gerasimova, told journalists that he is suspected of encouraging “the suicide of a minor.” The Russian daily newspaper Kommersant suggests the case is linked to a sermon in which he asked his parishioners whether they were “ready to die for Russia.” An advocate for the breakaway church told the publication that “it was not about suicide, but about self-sacrifice for people, about patriotism.”

Romanov’s long history of explosive claims have simultaneously won him followers and drawn criticism from church officials. He has repeatedly given voice to anti-Semitic conspiracy theories involving the fabricated ‘Protocols of the Elders of Zion’ hoax, which claim that secretive Jewish organizations are working to subject the world to their rule.

Romanov has previously fallen foul of law enforcement over his refusal to close his churches and encouraging followers to break coronavirus prevention laws to attend them. “Whoever encroaches on the closure of temples – damn it and his whole family,” the priest has said. He has previously been issued with a fine over the statements.

In October, Romanov was officially excommunicated from the Orthodox Church in a decision sanctioned by its top priests. He was found guilty by a Church tribunal of violating the priestly oath, monastic vows and a number of other rules. However, he has since continued to perform his role as a priest as part of the Sredneuralsk Convent.

Romanov controls three large monasteries in the region, as well as residential buildings, industrial sites and farms. His group has plans to build the largest Orthodox Church in the world, with capacity for up to 37,000 worshippers.