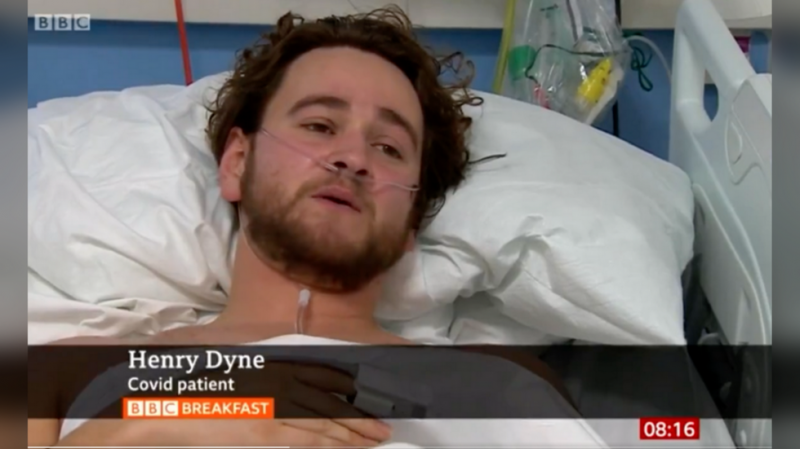 A man who appeared in a BBC interview while suffering from Covid-19 in hospital has rebuked claims that he is a performer, stating that he only changed his Instagram bio to “1x Academy Award Winning Crisis Actor” as a joke.

Henry Dyne, a 29-year-old IT sales director, told Reuters and other news outlets this week that he changed his Instagram profile in an attempt to mock those who claimed he was an actor hired by the BBC.

Dyne, who was interviewed by the British broadcaster after being admitted to hospital with Covid-19 in July 2021, recently featured in a BBC News review of the year, screened on December 22.

In the interview, Dyne, speaking from his bed at King’s College Hospital, urged people to get the Covid-19 vaccine. “Get the vaccine; honestly, get the vaccine. I put it off for no real reason, other than probably laziness,” he stated.

However, Dyne’s recent appearance on BBC News and the inclusion of “1x Academy Award Winning Crisis Actor” on his Instagram page has only served to fuel conspiracy theories.

One video, in which the BBC is called out by a viewer who opens Dyne’s spoof Instagram page, has been seen more than 1.5 million times on social media.

The video is one of many in which Covid deniers and anti-vaxxers believe they’ve caught out the British broadcaster.

While fact checkers have confirmed there is no truth to the allegations, more perceptive Britons may have realized that the Academy Awards – also known as the Oscars – don’t hand out prizes for so-called “crisis acting.”