Covid-19 should show US that real danger to American lives is public health, not ‘malicious’ Moscow – Russian security chief 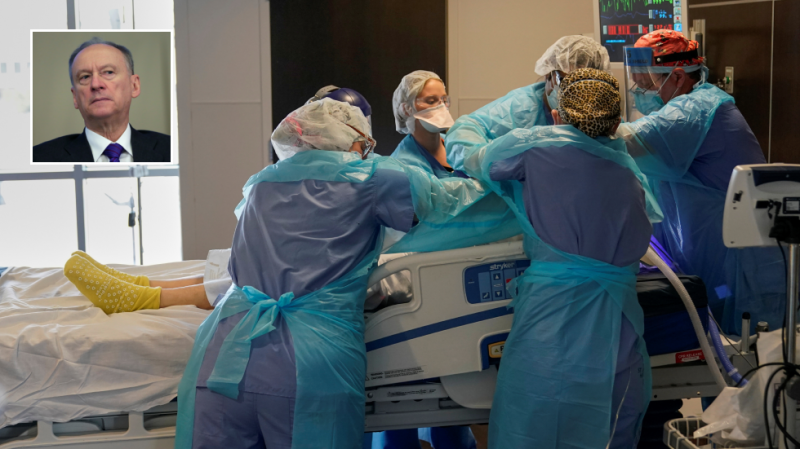 On multiple occasions, US President Joe Biden has claimed that Russia poses the biggest danger to America on the international stage. Not so, says Nikolay Patrushev.

“It turns out that the main threat to the lives of Americans is not a malicious Moscow,” he told Russian newspaper Kommersant. “In the United States, the death toll from the epidemic exceeded 560,000, which is more than their losses in both world wars combined.”

According to Patrushev, who used to head up Russia’s intelligence agency, the Federal Security Service (FSB), American politicians have been diverting citizens’ attention from the country’s healthcare difficulties by pointing the finger at the Kremlin for various perceived issues.

“America considers itself entitled to dictate the rules to the whole world and determine the fate of mankind,” he continued. “But the question arises: does a country that failed to protect the lives of over half a million of its citizens from the disease have this right?”

Born in St. Petersburg, then named Leningrad, Patrushev served in the KGB until the fall of the USSR, before working his way up its successor, the FSB. In 2008, he left the intelligence field and became the secretary of Russia’s Security Council, composed of senior politicians and the heads of defense and security agencies.

Patrushev knocked down suggestions by the Kommersant interviewer that Russia’s excess mortality figures were just as bad as America’s. According to the security chief, there is no reason not to believe the official Covid-19 death total, which currently stands at 101,480 – significantly lower than the US figure.

“We were not prepared for the fact that things would develop this way and so rapidly – no one was ready – but we coped with it,” he explained. “And now we are actively helping others, unlike the United States, which is selfish.”

According to Patrushev, Moscow is increasingly willing to share the country’s Sputnik V vaccine around the world. In contrast, the US is engaging in political games, not viewing the world as a single community but, instead, dividing everyone by nationality, race, and religious beliefs.

“Black lives matter or white lives matter – let the West decide. For our country, ‘all lives matter’ is the only right slogan. Our vaccines are further proof of this,” he said.

When it comes to relations between Moscow and Washington, the current situation is at its “lowest level since the end of the Cold War,” Patrushev claimed, noting, however, that there has been a long history of cooperation between the nations despite disagreements. In particular, he explained, the two could come together to battle international terrorism, extremism, and organized crime; fight acute humanitarian problems such as hunger; and resolve regional issues such as in Syria.

“The Russians and Americans today have no reason for hostility. We are not divided by ideology, as we were in the past. The field for cooperation is vast,” he said.

As well as demonstrating a willingness to engage with the US, Russia is also open to close and constructive dialogue with the European Union, citing the “historic ties” that have bonded Moscow with other capitals on the continent.

“It is important to interact with Europe. But joining Europe at any price is not an idée fixe in Russian geopolitics,” he explained. “Nevertheless, we are keeping the door open. … We are ready to see European partners at the same table with us in resolving key regional problems.”

In particular, Patrushev said that Brussels and Moscow could cooperate in the fields of science, culture, and technology, noting that many European nations have asked for mass doses of Russia’s Sputnik V Covid-19 vaccine.

The EU is yet to approve Sputnik V – its regulator, the European Medicines Agency, is still reviewing the jab. Despite it not being registered in the bloc, two EU members, Hungary and Slovakia, have already unilaterally imported and started using the vaccine. Politicians from other EU nations have also revealed that importing the Russian formula is a priority, including Austrian Chancellor Sebastian Kurz.