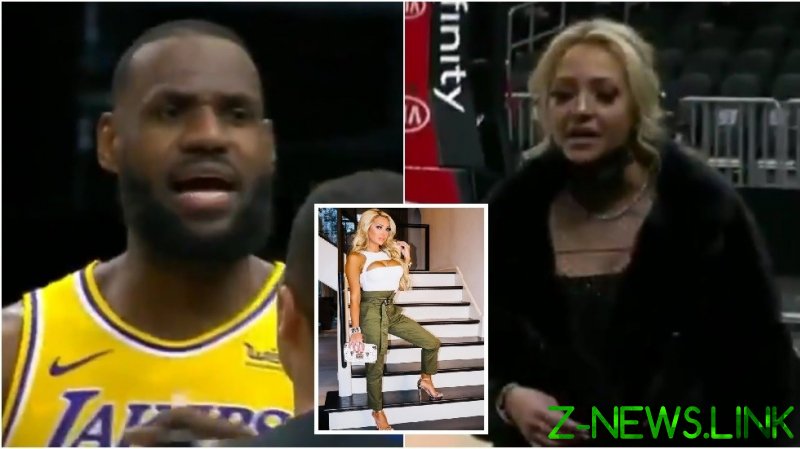 Four fans were ejected during the fourth quarter at the State Farm Arena after trading words with James as he helped the Lakers to a 107-99 victory.

The four-time NBA champion initially appeared to be involved in a back-and-forth with a man later identified as local businessman Chris Carlos, before his wife Juliana became involved.

She was seen furiously pointing her finger at James before being asked to leave the arena.

Juliana Carlos later posted her version of events to Instagram in an expletive-filled rant in which she claimed James had insulted her and her husband.

“Listen, let me tell you. LeBron James looked at my husband during the game and cussed him out, and I stood up and I go, ‘Don’t f*cking talk to my husband. Talk to my husband one more time and I will f*ck you up’.

James didn’t discuss the words used in the exchange with the Carlos family, but did suggest they may have been well-refreshed during the incident.

“They might have had a couple drinks, maybe. And they could have probably kept it going during the game, and the game wouldn’t have been about the game no more, so I think the referees did what they had to do.”

The Lakers star later made light of the spat with a viral tweet labelling Juliana Carlos a ‘Karen’ – the ubiquitous term now applied to supposedly privileged white women.

Carlos’ Instagram account – which now boasts more than 31,000 followers – saw a surge in activity amid fervent interest in her and her husband.

Chris Carlos reportedly runs a family distribution business in Atlanta, and his wife later revealed he is an avid Hawks fan.

Nine NBA teams including the Hawks are allowing fans to attend home games, but with limited capacity.

Lakers coach Frank Vogel picked up on the fact that Carlos had her mask lowered during the exchange, saying: “You obviously can’t have fans taking their masks down and shouting at our players with the virus out there during these times.”

Monday’s attendance was 1,341 – although the now infamous “courtside Karen” was among those who didn’t stay until the end.