Home / WORLD / ‘Could have said nothing’: Andrew Yang scorned after he tries to jump on #NationalPetsDay trend with pic of dog he ‘gave away’

‘Could have said nothing’: Andrew Yang scorned after he tries to jump on #NationalPetsDay trend with pic of dog he ‘gave away’ 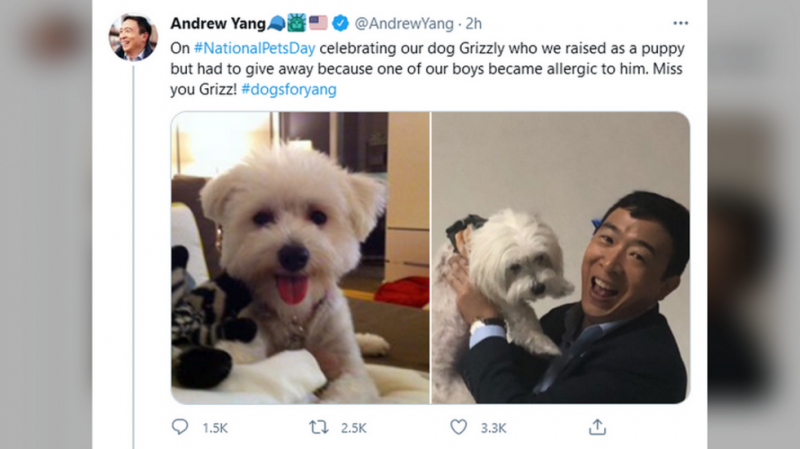 “On #NationalPetsDay celebrating our dog Grizzly who we raised as a puppy but had to give away because one of our boys became allergic to him. Miss you Grizz!” Yang tweeted on Sunday, adding the hashtag “#dogsforyang.”

Yang included images of him and Grizzly, as well as a video of them with the caption, “He still remembers Daddy.”

While pet photos can typically be one of the most innocent and easy ways to win praise on Twitter, Yang found himself mostly trending for all the wrong reasons as critics blasted him for posting a picture with a dog he had to get rid of.

“Speaking as someone who just had to say goodbye to my beloved cat, it’s just profoundly weird to celebrate a dog you *gave away*,” Raw Story’s Matthew Chapman tweeted.

“You could have said nothing. It’s OK not to have pets,” another user wrote.

“When you didn’t actually have to tweet anything but made this decision,” added another.

Others marveled at Yang’s ability to so colossally mess up such an innocent tweet.

“I feel like whatever algorithm or AI your campaign has decided to use is profoundly flawed,” author Jeff VanderMeer tweeted.

Yang did find some supporters who pushed back on the hate, arguing a child’s allergy is a perfectly good reason to find a new home for a pet.

“It really is okay to give a dog away if it reduces the quality of life of your *actual child,* and yet, FREAK OUT because nothing is more precious than A Good Doggo on Twitter,” writer Sonny Bunch wrote in Yang’s defense.

Yang’s viral tweet came on the heels of another controversy on Sunday after the mayoral candidate tweeted criticism of unlicensed street vendors in New York.

“You know what I hear over and over again – that NYC is not enforcing rules against unlicensed street vendors. I’m for increasing licenses but we should do more for the retailers who are paying rent and trying to survive,” he tweeted, adding that, as mayor, he’d like to bring more street vendors into the “legal market.”

Tags after andrew could nationalpetsday nothing scorned tries