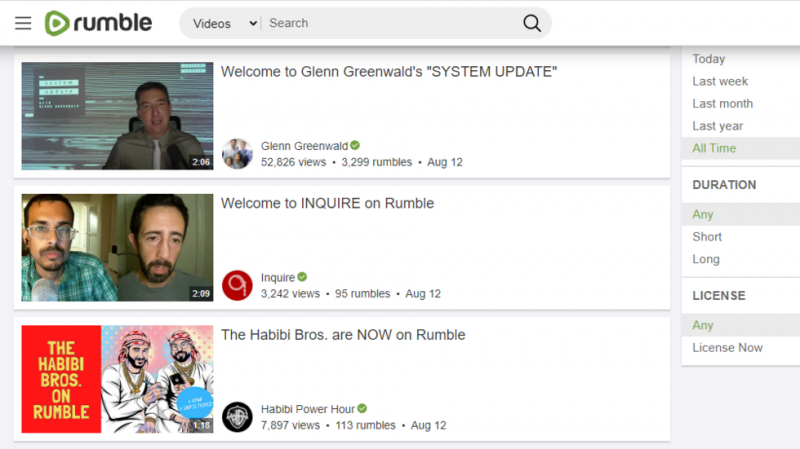 The veteran journalist, along with former Congresswoman Tulsi Gabbard and several other well-known commentators, have joined Rumble’s “deep pool of content talent,” the company said in a press release on Thursday. As part of the agreement, Rumble will provide the all-star content creators with resources to help them produce videos that will be exclusive to the site for a limited time.

The platform’s popularity has skyrocketed, experiencing a 25-fold increase in viewership over the past year.

Under the deal, Greenwald will continue his ‘System Update’ video program that he began while still at the Intercept and continued when he took up independent reporting at Substack. The show will appear on Rumble two hours before it is published elsewhere.

It’s not clear how much Greenwald is being compensated for the move, but he said the “ample funding package” would be used to pay for a “highly professionalized form of video.”

While speaking with Fox News personality Tucker Carlson on Thursday, the journalist said it was time to fight back against the “immense power” that YouTube has over political discourse. The Google-owned platform “is increasingly refusing to allow any dissent – not just crazy dissent, but even informed dissent – to official decrees,” the renowned investigative journalist said.

While speaking out against censorship is important, moving over to Rumble represents an actionable solution to the growing threat posed by Big Tech’s control over the marketplace of ideas, Greenwald argued.

In a statement, Gabbard, a former lawmaker from Hawaii and 2020 Democratic presidential candidate, condemned “Big tech monopolies” that “act with impunity as they police our speech, squash debate, and censor those whose speech they deem “unacceptable.”

As Rumble noted in its press release, its new lineup of high-profile content creators represents a range of political views while sharing a common trait: A “commitment to challenge the status quo, seek the truth.”

One of the prominent content creators who signed with Rumble, Matt Orfalea, was targeted by YouTube simply for pointing out the platform’s attempts to censor discussions about ivermectin, a drug that some medical experts believe could be effective against Covid-19.

In a recent interview with RT, Orfalea said that YouTube’s algorithm – purportedly designed to weed out “dangerous” material – was actually shutting down “normal discourse.”