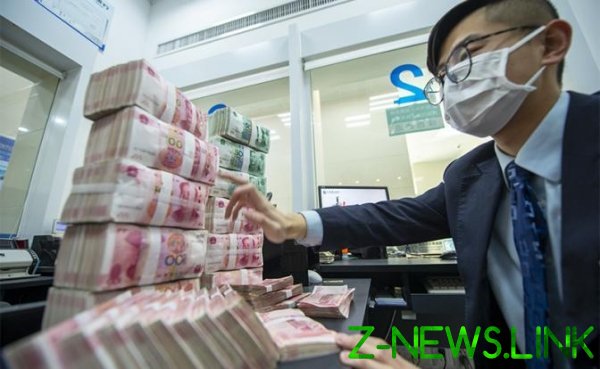 International experts have revised their forecasts for China’s development. Now increasingly such evaluations: the Chinese economy will be the largest in the world after 30, and after 15 years. These forecasts are based on an analysis of the opportunities offered to the middle Kingdom after overcoming the current crisis. But not only that.

As you can see, China, quickly and efficiently cope with the epidemic of the novel coronavirus is returned to normal. And, does this against the backdrop of problems in other countries, becoming almost the only large island of stability and growth. Worked different than in the West, the social model and the structure of the economy, which actively criticized before the crisis. One of the main advantages of China is that it is a manufacturing economy, not financial. There are a number of advantages, for example, rigid centralisation of power in its effectiveness.

But it turns out that life now throws at the feet of the Eastern giant huge additional opportunities. First, it is twice fallen price of oil. As you know, China is the world’s largest consumer of oil and, accordingly, the largest importer. And so, taking advantage of the situation on the market in March, China bought 1.6 million tons of Russian oil. In January, the purchases amounted to 1.2 million tons, which also exceeds the regular amount. But the oil China buys not only in Russia but also in other countries, including Saudi Arabia, the US and even Turkmenistan. Building supplies indicates that the PRC uses the drop in oil prices to replenish their strategic reserves. Analysts of the British consulting company Wood Mackenzie believe that the strategic and commercial oil stocks in China in 2020 may reach 1.15 billion barrels, which is enough for three months consumption. For comparison: in 2019 the oil reserves of China amounted to only 900 million barrels, and in 2014 — 200 million barrels.

International experts have already predicted that the funds generated through savings on oil, China will use to buy assets around the world, increasing its technological power and secured in the leading sectors of the world economy. In the West fear that it will make even more real the program “Made in China 2025”, which aims to become the leader in the high-tech industries and the creation of a new economy. It is no coincidence that US is the main opponent of China in trade disputes — is working to raise oil prices given, including the China factor. It should be borne in mind that at the end of last year began to operate the gas pipeline “Power of Siberia”, by which China now receives and cheaper Russian gas.

Low energy prices will provide greater competitiveness of Chinese products on the world market will reduce prices of consumer goods and services, which will spur domestic demand, which is now the driver for the development of the Chinese economy. For example, in March, about 10 percent cheaper pork is one of the favorite foods of the Chinese.

Secondly, breakthrough is expected in many sectors of China’s economy. It has made the manufacture of medical equipment and pharmaceuticals. This is understandable, since the world has witnessed the surge in consumption, and China replies: in March it exported medical supplies to $ 1.5 billion. Whether there will be in the background of coronavirus epidemics around the world.

Rapid development is experiencing the already saturated Chinese market of courier services and Internet trade. Courier company of China in March delivered a total of 5.7 billion parcels, which is 17.3% more than in the same month in 2019. PI revenue of the sector increased in March by 20% compared to the previous year to 71.5 billion yuan (about 10 billion USD). Total revenues of this business in the first quarter reached 157,99 billion yuan.

Thirdly, China controls the exchange rate of its currency, ensuring financial stability and using foreign currency market to their advantage. Now this will help China to overcome the temporary difficulties and increase the benefits. “I have no doubt that China’s economy will quickly recover. She is already showing good recovery rates,” — said in an interview with Xinhua news Agency academician of RAS Sergei Glazyev. In his opinion, the experience of the 2008-2009 crisis showed that Russia and other States of the EEU are in a more vulnerable position. “This is due to the excessive liberalization of currency regulation, which led to the dependence of the financial market from international speculators. American hedge funds and associated speculators are actually manipulating the foreign exchange markets of our countries, shaking the courses of the national currencies. It causes enormous damage to mutual trade and joint investment, destabilizie macroeconomic situation, — says Glaziev. — We need to learn from the experience of China, which has made the inclusion of the yuan in the basket of global reserve currencies without providing the freedom of conducting cross-border transactions on the capital account”.

Fourth, as a result of economic problems in other countries, China will get control of the major infrastructure and other assets. While in some cases he will not have to pay for them. For they have paid previously.

The USSR and Russia gives States a loan without collateral and liabilities in case of insolvency. Then, when it turns out that non-performing loans, these debts are simply written off. China is their money and considers just, or of some ephemeral political gain does not forgive debts. He lends a very different principle — secured strategically important sites, deposits, assets. This is a game for a long time, which now can bring dividends.

Sri Lanka, who are unable to pay off the Chinese loan, was forced to transfer to long-term use the sea port of this country Hambantota. A few years ago, the government of Djibouti appealed to Beijing with a request of restructuring the debt of 1 billion dollars. As a result of negotiations China has received the site and has created in Djibouti, its first foreign military base.

Borrowed from China and our neighbours — the countries of Central Asia. So the external debt of Tajikistan exceeds $ 1.5 billion, half of Chinese loans. As a result, Chinese companies are gradually get to use Tajik deposits of gold and silver. Turkmenistan is calculated according to the Chinese loans gas.

In the past year, China has completed the construction of a railway in Laos, and there also exist Chinese borrowings. Owed to China, even Latin America, such as Argentina, and secured infrastructure. So, not using military force (unlike the USA), China wins the global position. I can say: thus China captures a weak state. But they are not forced to take out loans. In addition, Chinese money usually given on favorable terms, contribute to the development of these countries invested in infrastructure projects that stimulate economic development. But the return is saved.

Two years ago, Time magazine broke the alarm: “China announces multi-billion-dollar investment in infrastructure in Africa. This debt trap, which builds Beijing, can be costly for the United States. After all, African countries receive aid from China, using as collateral its strategic assets, including oil. As a result, these assets may be at the disposal of Beijing”. “Already today, China annually receives $ 180 billion from their investments in Africa”, — with alarm wrote to the American magazine. It was during the summit of China-Africa held in Beijing. Then Chinese President XI Jinping has expressed the willingness of China to invest $ 60 billion in infrastructure projects in Africa.

So how much was owed by developing countries to China? It is known only in Beijing, because the terms of contracts are subject to commercial confidentiality. Assessment Wall Street Journal, it’s about $ 200 billion, which corresponds to a half of all issued China’s foreign loans. The American newspaper refers to an authoritative study by economists Carmen Reinhart (Harvard University), Sebastian horn (Munich Ludwig Maximilian University) and Christoph Tribeca (Kiel Institute of world Economics). According to estimates of experts, the debt of about a dozen poor countries to China is at least 20% of their GDP. A good asset is likely to go to China as a result of the crisis and to strengthen its position in the world.

Besides all the above, there are other positive points for China in the current environment, they cannot be completely overlooked in this article. This development of 5G technologies, artificial intelligence, new sources of energy. There will be constraints, for example, stopping production in the US and Europe, for which China is supplying the necessary components. A temporary decline in demand for Chinese goods in response to the crisis. It is too early to say how it will turn. But it is obvious that China has a chance to accelerate the implementation of their plans and to stimulate development.

And the last one. Quickly defeating the coronavirus, China has instilled even more optimism in their citizens. Manifested millennial traditions of the country, where the rulers, irrespective of their ideology and job title, carefully treat the people. The crisis is manifested particularly in tax cuts, additional financial support. The Chinese have seen how efficient a government, a priority which in this case is health and well-being of the nation. People don’t fear loss of revenue and collapse of the entire life, because he saw it again: the government considers the interests of all segments of the population, carries out reforms, which contribute to the welfare of the people, development of the country. This reinforces the already present social optimism. Citizens with confidence and a positive look to the future. And this will certainly affect the acceleration of the pace of development of China.