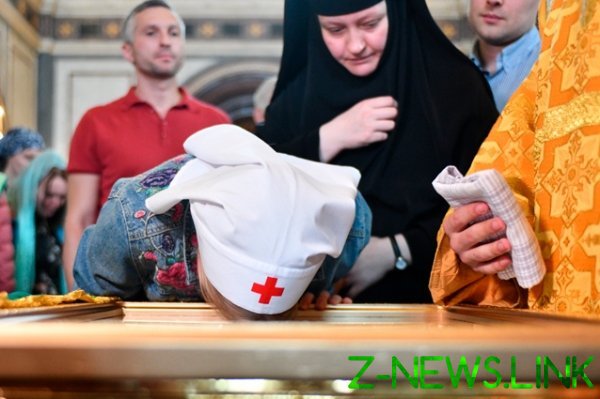 A senior representative of the Russian Orthodox Church, likened the epidemic coronavirus with the grace of God.

Metropolitan the Ryazan and Mihajlovsky mark made on the website of the Ryazan diocese with the word of Archpastor. The subject of his address was the difficult epidemiological situation in the country.

He began his address, the Archbishop recalled that in the old days, in the days of lent had closed the theatres and stopped the balls. These days it’s hard to imagine that the people refused entertainment.

— However, the Lord did the impossible in the closing days of lent, theaters, restaurants and other institutions. Our entire country was plunged into a quarantine, ‘ said mark.

However, the Soldiers of Christ – the Cossacks, do not agree with this position.

“The Cossacks, as Christian soldiers, are on the front line in the fight against manifestations of the forces of Darkness. Disease, viruses — anything that leads to perdition, is Satan’s tricks, and it is very important that the Church not become a source of contagion”, — reads the statement of the Cossack atamans Council of Russia

Cossack General Gennady Kovalev calmly at the very beginning of March said: “No kissing objects of worship, until better times! We need priests to bring in the divine form — be required to have a medical certificate and pass a medical examination… God forbid, someone out there is infected, then people will completely stop going to the temples. In Italy the Church because of the epidemic to check and even close to the time, and rightly so. Maybe we have someone and are convicted of such a decision, but the Cossacks, independent people, we’re not looking”. Further, the General expressed the hope that the CPS will check the sanitary condition of the churches and forced the priests to have a health book and health exams. https://www.rt.com/russia/482762-covid-19-russia-church-icons-kissing-ban/

However, even in large churches have not yet realized the seriousness of the situation, says a report about the visit of the reliquary of John the Baptist in Saint-Petersburg. Hundreds of people are in the queue to the relics, but not after each volunteer rubs the glass covering power. But if near the relics there is at least the employee who has to do it, then the next, before the Kazan icon of the Mother of God flow prikladyvaya the icon goes, and the glass of the frame, according to the authors of the report, nobody wipes. Judging by the conversations, not all Orthodox Christians in St. Petersburg believe that the coronavirus exists.

With all this fresh baked Vladimiri Putin chieftain of all Russia – Nikolay Doluda, called such measures hygiene nonsense https://ria.ru/20200302/1566932484.html it is Impossible to respond to nonsense,” — told RIA Novosti Doluda, commenting on the banning of kissing the icons.