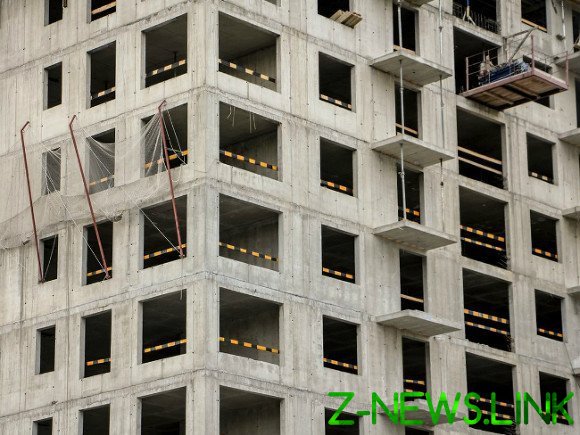 In the regions more than half of the apartments purchased with “pit” can take six months or a year later. Lose all — buyers, developers, budget.

According to experts, coronarita is the best time to buy their own homes soon prices will start to fall, and a cheaper mortgage. However, the risks in such a situation too great, therefore, making a decision, it’s important to weigh all the “pros” and “cons”.

The restrictions imposed at the time of the epidemic, will affect the timing of construction of new housing. In some regions, may suffer up to 50% of apartments in new buildings, which had planned to pass this and in the following years, predicted in the “Institute for urban Economics”.

According to the April 2020, in Russia, 1.6 million unfinished apartments that have already been sold or sold under agreements equity (DDU). More than 70% of the buildings are concentrated in regional centres. While in Moscow, St. Petersburg, Ryazan and Vladimir regions, Krasnodar region and Republic of Bashkortostan-apartment buildings now under construction on money of shareholders, three to four times more than it introduced in 2019.

According to Rosstat, last year in under construction houses sold 43% of the apartments. The Russians have already invested in new buildings at least 2 trillion rubles. Of them, according to the Central Bank, more than 900 billion rubles — borrowed.

For 86% of new buildings planned commissioning — 2020-2022 years. Almost 40% of new homes should be complete by the end of this year. That is — the finished flats will be sold at a time of expected economic recession resulting from coronariana, noted in the IEG.

In April, according to a survey of construction companies in the whole country at the time of the epidemic was temporarily halted 44% of the buildings. The amount of potential in unfinished IUE estimated at 2.2 trillion rubles. According to analysts, because of the restrictions imposed, 696 thousand apartments may not take on time. In a number of subjects such apartments in under construction houses — more than half. Including Moscow and Moscow oblast, Krasnodar Krai, Omsk, Lipetsk, Volgograd region, Crimea, TRANS-Baikal Krai and Kalmykia.

“Thus, the current restrictions of building activity in the conditions of a pandemic pose potential financial risks to all participants in the housing projects of the citizens, developers and banks,” — noted in the IEG. People won’t get their in time when you will get them at all. Developers will be left with unsold flats and loans. Banks, which issued project Finance to construction companies and housing loans secured by uncompleted flats, too, will come from this story winners.

Analysts note that while all this is only a preliminary assessment, and we can assume that they are not implemented in full. However, for objects that are in the initial construction phase, risks remain unfinished increase. Especially if the share of apartments sold in them is not great.

Among the houses that are planned to be commissioned in 2022, the amount of potential unfinished is 15%. For new buildings with a planned deadline in 2020-2021 years high probability of significant delays of their input from six months to a year.

Thus, according to analysts, the limitations of activities of construction companies associated with the complex epidemiological situation in Russia may lead to a slowdown in construction, which could have an impact on the economic development of the territories as a whole.

Construction is one of the key today on sectors of the Russian economy, which is 5% of GDP. The scale of the sector experts of IEG estimated at 5.2 trillion rubles. Of these, 3.9 trillion rubles have on regional capitals, including Moscow and St. Petersburg, representing approximately 8.4% of their total gross city product, that is, a much more significant part of the economy than in the whole country.

In some regions the potential market value of all uncompleted flats is playing an even more prominent role. For example, in St.-Petersburg it is 25% of the gross regional product of the Leningrad region is 19.5%, in Ryazan — 16,2%, in Adygea — 15,9%, in Moscow region — 15,7%, in Sevastopol — 13%, in the Krasnodar region is 12.7%. For the regional capitals of the scale of the contribution of buildings in the economy even more significant. In Krasnodar, almost a third of VGP in Ryazan — 19%. By the way, Moscow in this list is only in 25th place, and the weight of construction in progress in the economy of the capital — only 6.8% of VGP.

In this sector employs 6.5 million people — 9% of all employment in the economy. In addition, the construction is very high proportion of small and micro businesses, which make up 94% of the total number of companies. “Thus, the very institutional structure of the construction sector offers a weak resistance to shocks of supply and demand on the manufactured in the sector of services” — noted in the IEG. It seems that neither side of the process will not remain as a result of coronaries in the black.