Home / WORLD / Copy-pasted from the CIA? In deleted tweet, State Dept official mourns that US military won’t be able to protect Afghan women

Copy-pasted from the CIA? In deleted tweet, State Dept official mourns that US military won’t be able to protect Afghan women 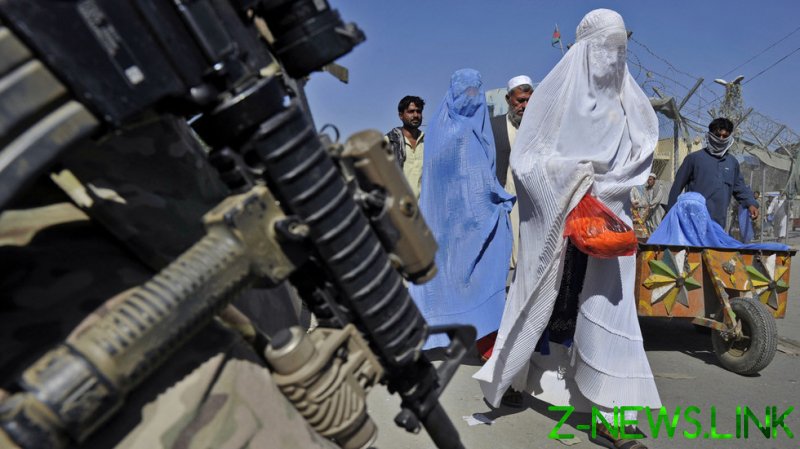 Molly Montgomery, deputy assistant secretary for European and Eurasian affairs, expressed apprehension about the end of the United States’ nearly 20-year occupation of Afghanistan, claiming that the withdrawal would have devastating consequences for Afghan women and girls.

“Woke up with a heavy heart, thinking about all the Afghan women and girls I worked with during my time in Kabul,” Montgomery tweeted on Friday. “They were the beneficiaries of many of the gains we made, and now they stand to lose everything. We empowered them to lead, and now we are powerless to protect them.”

The message was deleted shortly after it was posted. A spokesperson for the State Department told inquiring media outlets that Montgomery “deleted the tweet on her own volition.”

There has been growing concern about the fate of Afghan women, as a sweeping Taliban offensive continues to seize more territory in the country. The militant group uses Sharia law, under which women are subordinate to men. In the past, the Taliban have been accused of flogging and stoning women accused of indecency.

While the tweet may have been voluntarily removed, its provocative connotations seem to clash with the Biden administration’s framing of the US withdrawal from Afghanistan. The exit has been heavily criticized by media outlets and Beltway insiders as premature and irresponsible.

Jonathan Swan, a reporter for Axios, claimed that the scrubbed tweet “captures the private feelings of many others.”

Some replies expressed sympathy with the position, suggesting that the US could take in more Afghan refugees.

But his assertion that Montgomery’s beliefs were widespread didn’t seem to reflect the responses on social media. Many tweets questioned whether the US had even made “gains” in Afghanistan over the past 20 years.

One commenter said that, while they agreed with Montgomery, they were frustrated that they were only now hearing about the plight of Afghan women.

However, there’s nothing new about Montgomery’s messaging. In a leaked memo from March 2010, an elite CIA “problem-solving” group, known as the “Red Cell,” proposed that the best way to fight apathy and opposition to the war in Afghanistan was to highlight the “aspirations” of Afghan women and “their fears of a Taliban victory.”

The memorandum coincided with a cover story about an Afghan girl, Bibi Aisha, who allegedly had her nose cut off by the Taliban. But the heart-wrenching media story soon came under scrutiny. Ann Jones, a journalist for The Nation who knew Bibi personally, said that the Taliban were never involved. According to Jones, the teen told her that “her father-in-law caught up with her after she ran away, and took a knife to her on his own.” In a response to the Time story, Jones wrote that women had “already been abandoned” in Afghanistan and pointed to the “creeping Talibanization of Afghan life” under the US-backed government.

Curiously, Richard Stengel, the managing editor of Time when the Bibi cover story was published, later received a job as the State Department’s “chief propagandist” – to use his own words. In 2018, he said during a panel discussion that “I’m not against propaganda” and “I don’t necessarily think [propaganda is] that awful.”