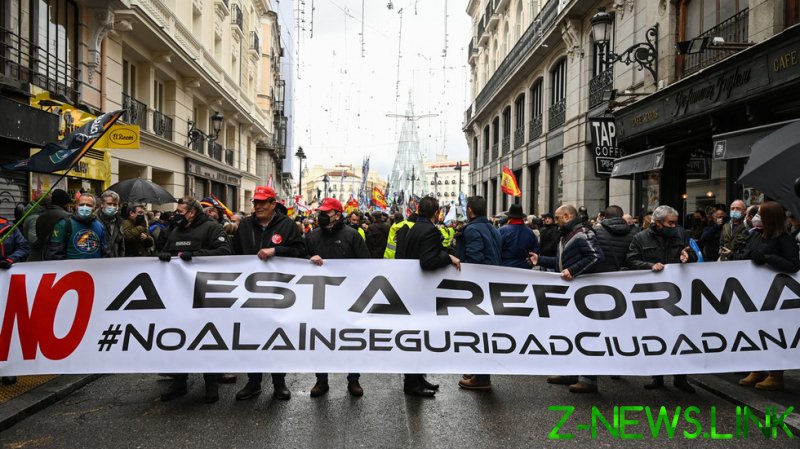 Spain’s left-wing cabinet has pitted itself against the country’s police force with its push to revamp the 2015 gag law, which, among other elements, prohibits the “unauthorized distribution” of the footage of officers. Members of more than 40 police unions, along with their supporters from the conservative People’s Party and the further-to-the-right Vox, marched through the streets of the Spanish capital on Saturday. Madrid’s mayor José Luis Martínez-Almeida was also spotted at the protest.

The organizers’ own estimates and those of authorities differed starkly, with anywhere between 20,000 and 150,000 reported to have attended the rally. Among the slogans heard and seen at the protest was “no to insecurity in Spain.” The demonstrators claim Pedro Sanchez’ government is denying the police due protection with its plans to overhaul Spain’s Citizen Security Law. The leader of Spain’s People’s Party, Pablo Casado, went as far as to claim that the incumbent left-wing government is siding with the criminals and terrorists.

A similar pro-police march was also held in the Spanish capital on Wednesday, with another one slated for December 14.

The Spanish government has refused to yield to police pressure, with Ione Belarra, the minister for social rights, describing the gag law, passed by the conservatives in 2015, as the “greatest blow to civil and political liberties since the transition [to democracy].” She surmised the law was designed specifically to clamp down on social protest in the wake of the 2008 economic crisis, which hit Spain particularly hard.

On top of making it legal for people to take pictures of police officers on duty, the socialist-led government is also planning to do away with the system through which protesters have to notify authorities in advance of any rally, and to introduce lower fines for those found in breach of the law.