Home / WORLD / Cops outnumber protesters at state capitols across the US, as the FBI’s ‘uprising’ evaporates 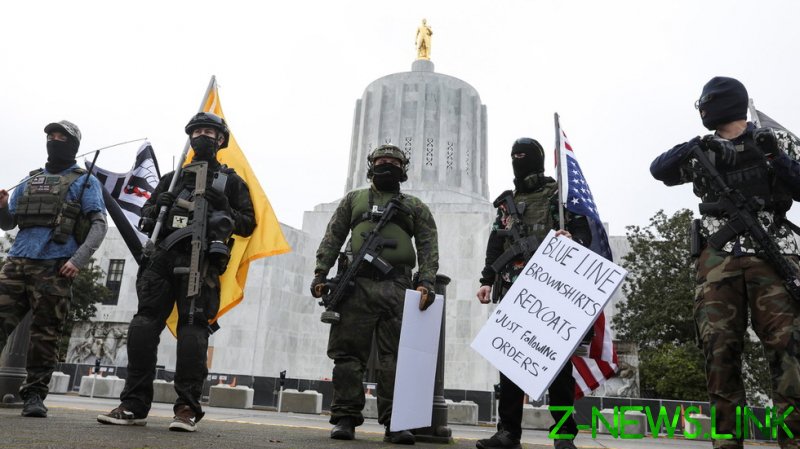 The Capitol Hill riot, which saw an unruly group of pro-Trump protesters run amuck in the US Capitol earlier this month, has prompted politicians to warn of an undercurrent of right-wing “extremism” and “domestic terrorism” across the country. As journalists and liberal pundits openly talk of the need to “cleanse” the nation of “Trumpism,” Joe Biden’s inauguration on Wednesday will take place in a locked-down Washington, DC, behind unprecedented security, including 20,000 National Guardsmen.

With Trump excommunicated from the internet, his supporters who stormed the Capitol facing draconian sentences, and the National Guard itself being combed for potential Trump loyalists, the FBI warned state-level government that “armed groups” of Trump supporters are readying an “uprising” on legislatures in all 50 states, beginning this weekend.

Statehouses across the country upped their security, as anti-extremism “experts”amped up the threat to the media. Yet by Sunday afternoon, it became clear that either the FBI and the media overstated the threat, or the Trump army was standing back and keeping its powder dry.

Armed protesters did show up outside the Ohio state house in Columbus, but they were outnumbered by police officers. A large contingent of the group appeared to be associated with the ‘Boogaloo’ movement, and told reporters that they were not there on behalf of Donald Trump, but for “individual liberty for all.”

Similar scenes were reported in Oregon and in Michigan, where around two dozen protesters had assembled at the capitol in Lansing by noon. No violence was reported, and they left an hour later.

In Georgia, only two armed protesters showed up at the capitol in Atlanta, while no demonstrators at all had showed up to most of the nation’s statehouses by mid-afternoon. In Florida, the FBI arrested one self-described “hardcore leftist” on Friday, for allegedly attempting to recruit comrades to attack a pro-Trump protest in Tallahassee on Sunday. However, even if he hadn’t been arrested, he would have had no targets, as no protest materialized.

President Trump has repeatedly called on his supporters to avoid violence, a call they appear to have heeded since the Capitol Hill riot. However, even if Biden’s inauguration passes peacefully, security at US legislatures could remain heightened for the foreseeable future. In Washington, DC, Mayor Muriel Bowser announced last week that security fencing and troop deployments around the US Capitol could be the “new normal” long after Inauguration Day.