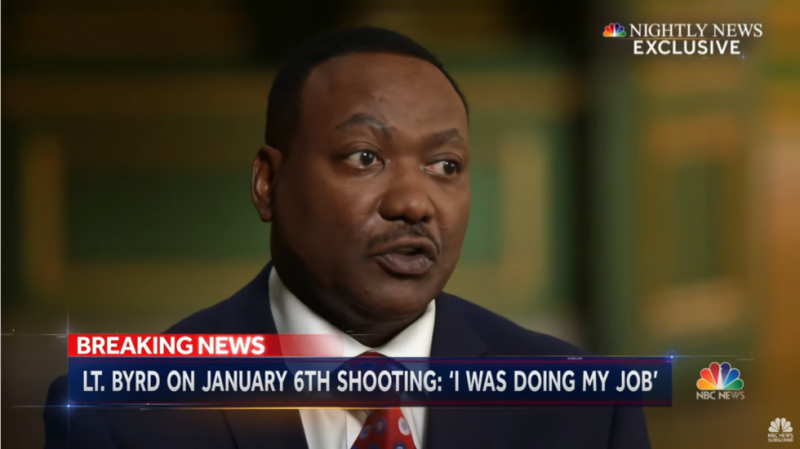 Speaking to NBC News in his first public interview on Thursday night, Capitol Police Lieutenant Michael Byrd defended his actions inside the halls of Congress earlier this year, saying he “showed the utmost courage” despite being “very afraid,” while insisting Babbitt was “posing a threat to the United States House of Representatives” when he shot her.

“You’re ultimately hoping your commands will be complied with, and unfortunately they were not,” Byrd said, referring to orders given to the 35-year-old protester.

Babbitt, an avid Trump supporter and an Air Force veteran of the Afghanistan and Iraq wars, was killed as she and other rioters attempted to breach a barricaded door inside the Capitol. In footage of the shooting, in which Byrd is partially visible, Babbitt is seen from behind as she was shot in the chest, dying a short time later in the hospital. She was unarmed.

Asked by NBC’s Lester Holt if knowing whether Babbitt was unarmed made any difference in his decision-making, Byrd simply answered “It did not,” suggesting he would have fired regardless.

No other officers present for the riot fired their weapons, including police directly behind Babbitt at the time of the shooting, who are seen in footage tending to her soon after she was hit. Byrd, however, said he could not account for the actions of his colleagues, and could only speak to his own judgement.

“I’m sure it was a terrifying situation. I can only control my reaction, my training, my level of expertise,” he said. “That would be upon them to speak for themselves.”

Babbitt’’s family has sued the Capitol Police for $10 million over her death, arguing that Byrd fired with “no warning” while describing the shooting as “an ambush.” However, the officer’s lawyer insists he did, in fact, warn rioters to keep back, but that his commands were not audible in footage due to the noise of the crowd. Byrd himself said much the same to NBC, maintaining that he was “yelling and screaming… ‘please stop, get back, get back, stop.’”

While federal prosecutors weighed whether to charge Byrd, they ultimately cleared him of all wrongdoing in April, finding “insufficient evidence to support a criminal prosecution.” The Capitol Police also concluded that by shooting Babbitt, Byrd may have prevented “serious injury and possible death.”

“Those words meant a lot, because that’s exactly what I did on that day. That was my mission, that was what I prepared for, and it’s rewarding and refreshing to hear that,” Byrd said, apparently holding back tears.