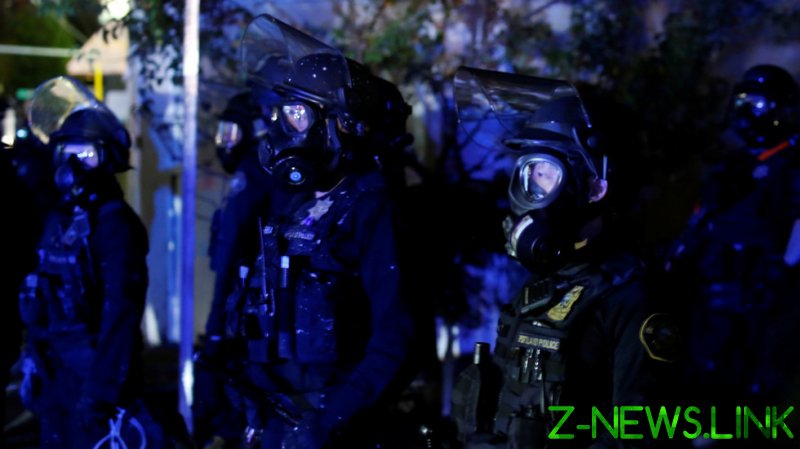 Video of the incident shows protesters running up to and surrounding the officer as he talks to the driver of a vehicle he pulled over for blocking traffic. The officer tells the demonstrators to “back up” several times, and the pulled-over vehicle eventually flees the scene.

As the officer mounts his motorcycle to “disengage” with the crowd, according to police, protesters continue to surround him, with one standing directly in his path and being hit by the bike, then getting dragged several feet before falling off.

Police say protesters threw objects at the officer, and one video does appear to show a cup of liquid being thrown while the cop is attempting to leave the scene.

Officers approached the woman who fell to see if she needed medical attention, and arguments broke out with protesters, leading to one person being detained.

The woman who was hit by the motorcycle can be seen in another video from after the incident limping and yelling at police officers, telling them she is “going nowhere.”

She was later arrested at another demonstration and taken to a hospital to be evaluated.

Some have criticized the officer who hit the demonstrator, while others have questioned painting him in a bad light, considering the protesters interfered with a traffic stop and the one who was hit blocked his vehicle.

“A PPB motorcycle cop runs over someone for sport with his vehicle,” criminal defense attorney T. Greg Doucette tweeted when sharing the footage.

Portland journalist Andy Ngo, meanwhile, was among those who strongly disagreed with the wording of a local headline which read, “Portland police officer drives motorcycle into protester at Friday night demonstration.”

“Correction: Rioter trying to stop police from following fleeing suspect jumps in front of his motorcycle. She appears to be fine as she returned to rioting in front of the police station within the hour,” Ngo wrote.