‘Coolest moment of my life’: Golf pin-up Spiranac dazzles her doubters with proof of hole-in-one (VIDEO) 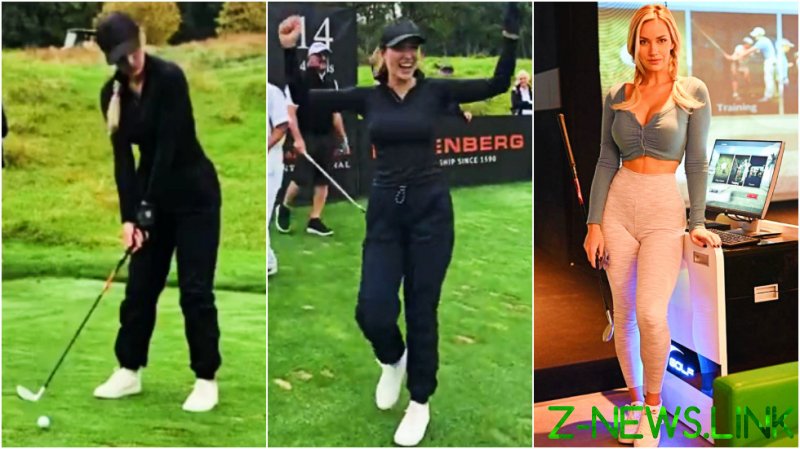 Show-off Spiranac is better known for her model-like photoshoots on social media than her golfing talent, although the 28-year-old was once a professional after being a noted college golfer.

Despite being praised by the likes of ex-European Tour golfer Sophie Walker earlier this year, the Twitter and Instagram sensation frequently finds haters replying to her posts, which tend to feature golf shots, revealing outfits or combinations of both.

When she offered the bold claim that she had “made a hole in one in front of Gary Player”, the American was inevitably challenged by some surprised readers to prove that she had managed the potentially once-in-a-lifetime achievement for any golfer.

Sure enough, Spiranac provided a clip of herself hitting the shot before being animatedly congratulated by her group afterwards, including 85-year-old nine-time Masters win Gary Player.

“And the video proof,” added Spiranac, who was wearing a less revealing black outfit than regular viewers of her works are used to seeing.

Spiranac was unsure whether the spectacular shot had been filmed, asking “did you get that?” before celebrating in front of the camera.

The stunning drive played out at the 148-yard 14th hole at Glen Arbor Golf Club in Bedford Hills, New York, where Spiranac was taking part in a charity event to raise money to research pancreatic cancer, which Player’s wife, Vivienne, died of earlier this year.

That is unlikely to ease the withering responses Spiranac receives in the future, having once admitted that she felt the golf world was full of “stuffiness” and had shunned her “because of her cleavage” while shaming her as “a sl*t.”

When it was put to her last month that her scores would put her in the top 0.5% of women golfers in the world, Spiranac replied: “I don’t think people realize how hard it is to make it and how good they are.

“I can play but never got to that next level. Most of it was mental with me but you need the full package to play at that level.

“I had multiple scores in the 60s on the cactus tour. It’s documented. I played bad in two tournaments and that’s all people remember. Also, the courses are so difficult and long. We aren’t playing the front tees.”

She has described her direct messaging inbox as “not pretty” and called receiving nasty messages after analyzing male players “just something I face as a woman in sports”, often meeting jibes with jokes.

“Anyone can have nice t*ts,” she retorted a month ago when it was put to her that she has the most popular Instagram account of any golfer because of her chest.

“You also need to have no shame and show them off. It’s hard work but someone has to do it.”

Spiranac’s following of 3.1 million is around 400,000 more than Woods, the next-most highly followed golfer.