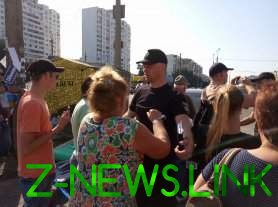 Instead of gas stations built café.

A network of filling stations OKKO promised to comply with the terms of the initiative group for the construction of revutskogo, 8 in the capital of gas stations and dismantle the gas station.

It is reported by the Committee to counter the illegal building on the Facebook page.

Reportedly, instead of gas stations on revutskogo will be a cafe.

“Galnaftogaz (OKKO) promised to comply with the terms of the initiative group. They refuse to petrol, take the fuel tanks and set electrosurgery. Already built the building should be converted into a café or something,” reads the page of the Committee to counter the illegal building.

See also:  In Kiev the Director of the controversial grammar school reinstated

Reportedly, OKKO will return to the contractor “güell Park” about the withdrawal of cases against activists and the lifting of the arrest apartments of the people and will ask the city Council to another plot of land for construction of filling stations.

“Tuesday “Galnaftogaz” to develop the concept of replacement land, that is, instead of land on revutskogo through the city Council, they must obtain a replacement,” – say the activists.

See also:  Ukrainians promise a warm weekend with no rain

The Committee to counter the illegal building assure that will monitor fulfillment of all three promises from OKKO.

“The struggle of the community from the gas station can be an example for people in other areas of Kiev how to defend their rights”, – stated in the message.

As you know, several months revutskiy in the capital is a struggle between activists, local residents and the developer regarding the construction of gas stations at the intersection of Akhmatova.