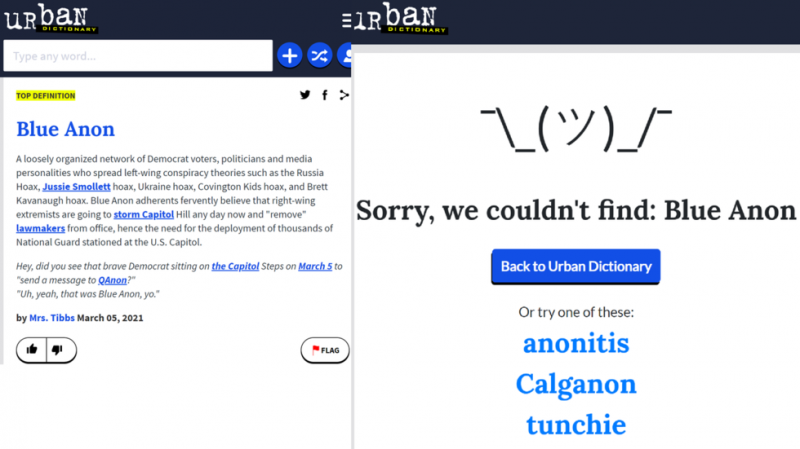 The term made it into the online Urban Dictionary of slang words and phrases earlier this week, only to be removed by at least Sunday. A search of the term, a play on ‘QAnon’ that has been used increasingly in recent months to mock leftists, now comes up empty. Previously, the dictionary showed a definition for Blue Anon, noting that it’s “a loosely organized network of Democrat voters, politicians and media personalities who spread left-wing conspiracy theories, such as the Russia Hoax, Jussie Smollett hoax, Ukraine hoax, Covington kids hoax and Brett Kavanaugh hoax.”

Conservatives interpreted the attempted disappearing of Blue Anon as a sign of success. “Wokies at Urban Dictionary zapped Blue Anon because it was too powerful,” journalist Jack Posobiec said Sunday on Twitter. Others predicted a ‘Streisand effect,’ when attempts to hide something inadvertently brings more attention and interest to it.

Author and Blexit founder Candace Owens took the takedown as an opportunity to illustrate the meaning of Blue Anon to her 2.6 million followers. “If you believe: DC is under military occupation because there are non-stop threats from Trump supporters; Joe Biden is the most popular American president of all time; Russia, Russia, Russia… you might be Blue Anon.”

But others couldn’t help but note another hypocritical case of Republicans being picked on. “Look at what Urban Dictionary allows while censoring Blue Anon,” conservative writer Deb Heine said. She attached screenshots of several anti-conservative terms, including “Republic*nt.”

Efforts to discourage popularization of the term Blue Anon may go beyond Urban Dictionary, some social media users claimed. Some pointed out that Google searches for the term Blue Anon return links to skiing goggles and snowboarding equipment, while other search services, such as those offered by DuckDuckGo and Yahoo, return more relevant answers.

One Twitter user posted a graphic showing that Google searches for Blue Anon have surged over the past week. “Why are you suppressing Blue Anon?” the commenter asked. “According to your own trend search, this term is exploding; however, your results contradict this.”