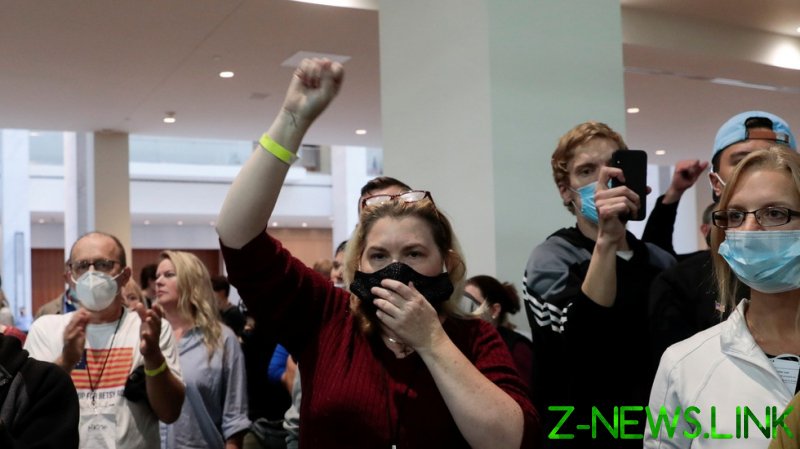 Footage of ballot counting officials covering up windows so onlookers cannot see inside at the center has been widely spread across social media, with Trump supporters latching onto it.

“Imagine the reaction from the media and Democrats if this happened in Texas or Florida while the election results were close,” reporter Ryan Saavedra added.

Biden has been declared the winner of Michigan, though Trump’s campaign has also declared victory, citing possible voter fraud in the state.

Matt Finn, the Fox News reporter to post the original video, tweeted that he asked several workers at the polling location why the windows were being blocked, but he was not given a “clear answer.” He also reported that some of the challengers looking to get inside “feel there wasn’t a fair amount of [Republicans] and [Democrats] in the room.”

Soon after Biden took a lead in the state, more than 100 challengers arrived outside the TCF Center, demanding to be let in to monitor the fairness of the process. Video shows a poll worker saying they are not allowing any more challengers inside and the protesters should spread out to adhere to Covid-19 restrictions.

Over 500 challengers have been roaming the center, according to the Detroit Free Press. Of those 500, 227 are Republican challengers, 268 are Democrat, and 75 are nonpartisan challengers from groups like the ACLU and League of Women.

Challengers have reportedly been free to walk around the center, observing absentee ballots being counted, but Republicans have still insisted there aren’t enough of them in the room to ensure a “fair process.”

“This whole thing is under suspicion,” Attorney Timothy Griffin, a Republican challenger from Virginia who has been at the TCF Center, told Detroit Free Press. “It’s not equal.”

Other Republican challengers have described being escorted out of the room and implied this is because of their party affiliation, rather than any rules about the number of people allowed in the area. They are also saying not enough Republican challengers are being allowed to watch the counts as they happen.

Democrat challengers, however, have told local media they are facing the same restrictions as Republicans, and some of them are being kept out of the area too.

Other video from the center shows Trump supporters chanting “let us in” outside the windows being covered by officials as police arrive on the scene. Another from inside the room shows people gathering around a table and chanting, “stop the count.” Similar chants can be heard outside the center.

Biden supporters have had little sympathy for accusations from the Trump voters, with some claiming they are attempting to “disrupt” a Biden win and others calling for the cops to intervene.

Trump’s campaign has already announced a lawsuit demanding a stoppage to counting in Michigan, saying it can continue when “meaningful access has been granted” to ensure there is no voter fraud taking place.

The state’s attorney general has responded, saying she has faith the process has been carried out “transparently.”