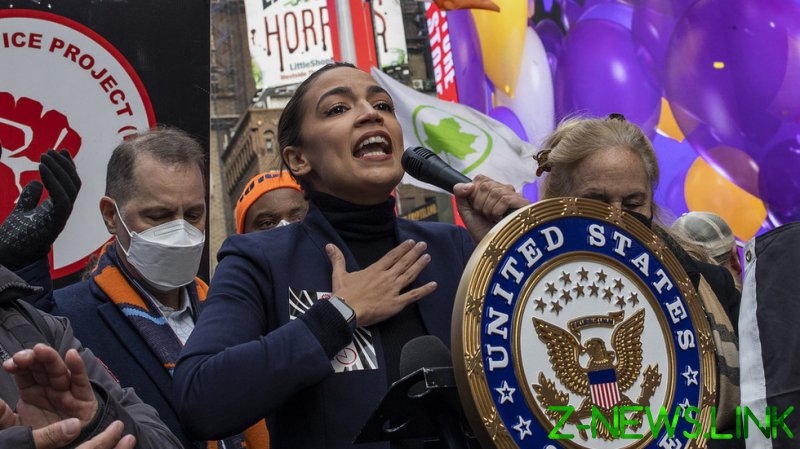 US congresswoman Alexandria Ocasio-Cortez (D-New York) denounced the US political system as an “oligarchy” on Friday, resuming the long-dormant class-war rhetoric that first attracted so many young voters to her campaign in 2018.

“When you look at the fact that our elections are bought, that corporations and […] powerful corporate lobbies have more say in our legislation than everyday people, we are living in oligarchy that has its democratic moments,” she declared in a video posted to Facebook.

The self-styled democratic socialist railed against a “presidency that’s not determined by popular vote” and a Senate where “tens of millions of people more can vote for one candidate, one party, and still be in the minority,” as well as a House of Representatives that “gets gerrymandered to all hell once every 10 years in order to ensure an outsize minority rule.”

“It is becoming increasingly difficult for people to defend the stance that we live in a democracy, in a true one,” she lamented.

The US government is formally a republic, not a democracy, and the presidency has never been determined by popular vote. Ocasio-Cortez’s complaints about Senate representation are likewise built into the country’s system of government – each state is represented by two senators, no matter how large or small the population.

Earlier in the same video, Ocasio-Cortez called Congress a “corrupt institution” and remarked that it was “really wild” and “difficult” to “try and be a normal person surrounded by so much decay and moral emptiness that frankly transcends party.”

While the video began as an indictment of congressional inaction on gun violence, it quickly broadened into a lament on how despite there being “so many different areas and issues where all of us agree […] Congress still can’t get their s**t together!”

Both houses of Congress are controlled by the Democratic Party and President Joe Biden is Democrat. However, that still does not seem to be enough to push through the legislative agenda supported by the party’s own voters.

The president has demanded stricter gun-control laws, as have many Democratic politicians, to no avail. Many in their party blame the deadlock on Republicans’ devotion to the National Rifle Association.

Ocasio-Cortez attempted to separate herself from the legislative masses, however, complaining that as long as the Democrats think “there’s some level of horror that is going to convince Republicans to change their minds,” mass shootings will keep happening.

“I don’t want to be one of those ding-dongs that just tells you to vote harder,” she said, saying that “people treat Congress like it’s some kind of incumbency protection racket. These seats do not belong to us.”

Ocasio-Cortez is up for re-election in November. Since taking office in January 2019, she has largely toed the party line, voting for bloated military budgets and backing party leadership that opposes many of the policies she supports, such as Medicare for All and student loan forgiveness.