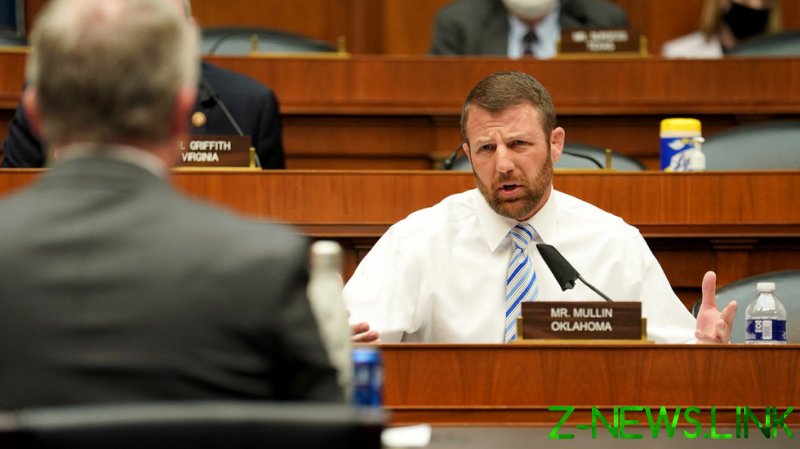 The daring rescue mission, which reads like a script for a corn-fed Hollywood action film, was first reported by Тhe Washington Post. According to the paper, Oklahoma Rep. Markwayne Mullin rang up the US ambassador to Tajikistan on Monday with an urgent and highly unusual request: he was planning to fly from Tbilisi, Georgia, to Tajikistan’s capital, Dushanbe, in the next few hours, and needed help safely transporting a large amount of cash across the border. The GOP lawmaker explained that he would then take a helicopter into Afghanistan as part of a self-initiated mission to rescue five American citizens – a woman and her four children – who were trying to get out of the country.

Embassy staff in Dushanbe reportedly rejected the request, saying that they were unwilling to help the congressman bypass Tajikistan’s laws restricting the movement of cash, particularly since his final destination would be Taliban-controlled Afghanistan.

According to officials familiar with the matter, Mullin was outraged by the decision and used threatening language directed at Washington’s envoy to Tajikistan, John Mark Pommersheim.

Mullin’s current whereabouts remain unknown, but his office released a statement that he was “safe” and that the lawmaker would “continue to do anything… to bring home all Americans from the war zone.”

The State Department declined to comment on Mullin’s one-man mission or his interactions with the US embassy in Tajikistan. The White House also refused to comment but pointed to a government bulletin urging American citizens against traveling to Afghanistan.

The US military completed its full withdrawal from Afghanistan late on Monday, just ahead of the August 31 deadline. A frenzied evacuation from Kabul’s airport was mired by stampedes, shootings and suicide bombings, in total killing more than 100 civilians and 13 US servicemembers. It’s believed that hundreds of Americans could still be in the country, although the White House has insisted that many of them chose to remain in Afghanistan.

Mullin’s apparently thwarted rescue mission marked his second attempt to enter Afghanistan in two weeks. Last week, the Oklahoma congressman traveled to Greece, where he asked the Pentagon for permission to visit Kabul. His request was denied.

“This is a sad day for our country,” Mullin said in a statement Monday night, adding that “Americans have been stranded in Afghanistan by the Biden Administration and are now left to defend themselves from terrorists overrunning the country.”

Two of his Congressional colleagues had more success in getting inside Afghanistan. Reps. Seth Moulton (D-Massachusetts) and Peter Meijer (R-Michigan) traveled to Kabul last week. Their unauthorized trip angered US officials, who accused the lawmakers of carrying out a publicity stunt at a time when all available resources and manpower were needed to help with the evacuation effort.

American citizens aren’t the only ones who were allegedly left behind by the US military: Numerous stories detail how Afghans who worked for American and allied forces during the nearly 20-year war are now at the mercy of the Taliban.

An Afghan interpreter who helped retrieve then-Senator Joe Biden from the mountains of Afghanistan in 2008 has reportedly begged the White House for help escaping the country, after failing to secure a flight out of Kabul during the evacuation.