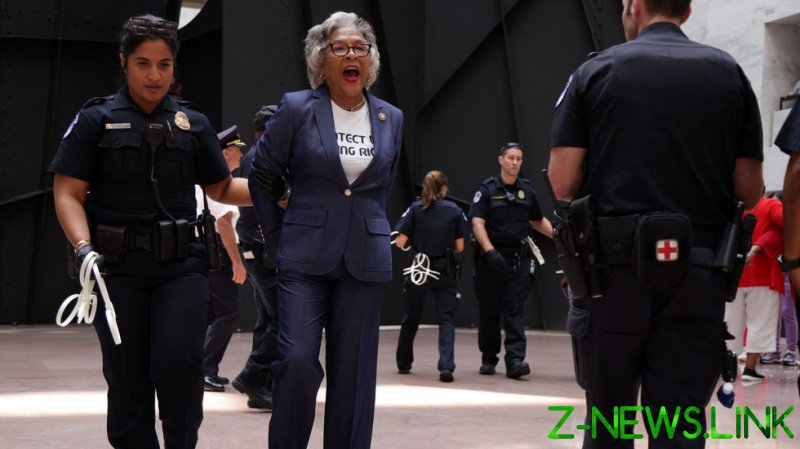 Seven women and two men were arrested on Thursday afternoon inside the Hart Senate Office Building in Washington, DC. The Capitol Police said they gave three warnings to participants in the “illegal demonstration activity” to disperse.

The nine were part of a larger group of about 20 protesters, including Congresswoman Joyce Beatty (D-Ohio), chair of the Congressional Black Caucus. Beatty was apparently the ringleader of Thursday’s demonstration, which called for ending the Senate filibuster and passing the two bills proposed by Democrats in the name of voting rights.

“Let the people vote. Fight for justice,” Beatty’s Twitter account posted, along with photos of her being handcuffed.

The stunt was part of the ‘Day of Action on Voting Rights’ organized by Beatty and her caucus. A larger group of some 40 politicians had gathered on the House side of the Capitol complex to announce their intent to march on the Senate offices and get arrested there.

“We might as well still have the dogs and the hoses because we don’t have the voting rights act,” Beatty said in her speech, referencing police violence against black civil rights activists in the 1960s.

Before locking arms and marching to the Senate side, Beatty and her colleagues waved their fists and chanted “Protect our vote” and “Freedom to vote.”

With its large atrium, the Hart building has been the favorite spot for numerous political demonstrations over the past few years – mainly by Democrats protesting the Trump administration, his Supreme Court nominees, immigration and environmental policies.

Upon entering the building and filing through the metal detectors, Beatty’s group stopped inside the lobby for photos and more chants.

Among the chants inside the building was “end the filibuster,” referring to the Senate practice of requiring 60 votes before proceeding to vote on an issue.

The current Senate is evenly split between Democrats and Republicans, and Democrats would need to either end the filibuster or somehow persuade ten Republicans to vote with them, in order to pass HR1 For The People Act and the John Lewis Voting Rights Act – both intended to address what the party calls danger to American democracy from GOP “voter suppression.”

In a speech in Philadelphia on Tuesday, President Joe Biden demanded the passage of the two bills in Congress. He also called Republican state legislatures passing election integrity laws an “assault on democracy” and a racist attempt to “subvert the right to vote in fair and free elections,” insisting that his victory in the 2020 presidential contest was perfectly legitimate and anyone questioning it was peddling “the Big Lie.”

A number of Democrats from the Texas state legislature fled to DC earlier this week in an effort to deny quorum and block the passage of the Republican-proposed voting bill. The Biden administration has sued Georgia over the election law it enacted in March, calling it racially motivated.

Beatty’s protest appears to be part of the same push. Serving in the House of Representatives since 2013, the Ohio congresswoman was elevated to chair of the Congressional Black Caucus – an entirely Democrat body – in January. Before coming to Washington, Beatty served in the Ohio House of Representatives for nearly a decade (1999-2008), taking over the seat held by her husband Otto for 20 years after he retired.