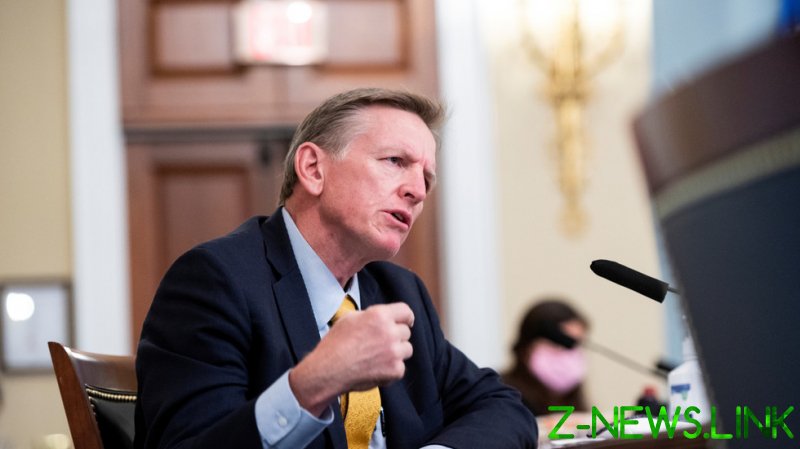 The House of Representatives voted 223-207 to pass the censure resolution on Wednesday, with Reps. Adam Kinzinger (Illinois) and Liz Cheney (Wyoming) the only Republicans to break with their party and side with Democrats across the aisle. Ohio Republican David Joyce voted ‘present,’ declining to take a position.

With the measure passed – the first formal censure in Congress to be approved in more than a decade – Gosar (R-Arizona) will now be stripped of his House committee assignments, including the Natural Resources and Oversight and Reform panels.

Posted last week, the video in question parodied the intro sequence for the anime ‘Attack on Titan,’ in which a photoshopped Gosar is seen doing battle – in over-the-top anime fashion – with the likes of New York Democrat Alexandria Ocasio-Cortez and even President Biden himself. Gosar’s team interspersed the cartoon with real-life footage of migrants at the US-Mexico border, as words like “drugs,” “crime,” “murder” and “trafficking” flashed on screen.

Gosar insists the clip was meant to be light-hearted political outreach to a younger audience. His Democratic opponents and a number of corporate media outlets, however, have denounced the video as a call for physical violence against politicians. Last week, House Speaker Nancy Pelosi (D-California) condemned the “horrific video,” claiming it contained “threats of violence against members of Congress” while even calling for a criminal probe. The Washington Post, meanwhile, has characterized the clip as a “violent video depicting [the] slaying of Rep. Ocasio-Cortez,” in line with other overheated coverage of the cartoon.

Responding to the censure resolution, Gosar said he “categorically” rejects the notion that the video promoted violence, or was “dangerous or threatening” in any way.

While Gosar said he took down the video voluntarily, he added that he did not do so because it condoned violence, but rather “because some thought it [did],” adding that he “self-censored” out of “compassion for those who genuinely felt offense.”

Another Arizona Republican, Andy Biggs, came to Gosar’s defense on the House floor, showing off his Japanese language skills while arguing the parody was “intended to demonstrate the alienation people feel, particularly young people, in their cultures.”

Ocasio-Cortez, for her part, blasted the majority of House Republicans for their unwillingness to condemn the anime satire, claiming that it portrayed the “[murder] of a member of Congress” while asking “what is so hard about saying that this is wrong?”