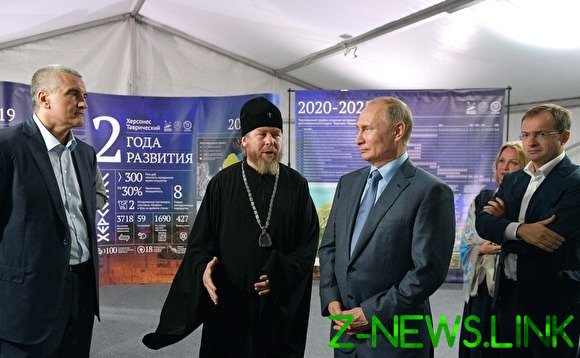 Metropolitan of Pskov and Porkhov Tikhon (Shevkunov), which the media called “the Confessor of Vladimir Putin” spoke about hacking my mail. Now the Blackmailers are threatening to publish information for many years.

Shevkunov told RIA “news” that found the hacking a few months ago. In the mail contains correspondence for many years. “My private and business correspondence were published on the website of Black Mirror. In parallel, these materials have republicanise other telegram channels,” — said Shevkunov.

The attackers, according to the priest, was required to pay 10 million rubles to suspend publication. But Shevkunov refused. He stated that he does not want “to go to the terms of the Blackmailers and encourage dirty business.” Shevkunov said that he did not notice the hacking and commented on it only because of the large number of questions from the media. “I know that the authorities are looking for burglars, but will find or no — view”, — said the Metropolitan.

The email continues. In the Internet posted an audio file of his conversation with film Director Nikita Mikhalkov. He Shevkunov explains this account as follows. “The Patriarchal Council had to obtain the opinion of the members of the Council about how they recommend to respond to the blasphemous manifestations in contemporary art, said Shevkunov. — Nikita Sergeyevich view was special, more complex. We agreed with him that I will record our phone conversation, then to print and edit the text with his position, removing from it a particularly expressive passages and some profanity, which, to my great regret, sometimes enjoyed our great Director”. Record Metropolitan has sent his assistant, and now they put him on Black Mirror.

Messages that mail Shevkunova broke, began to appear in mass media since the beginning of the year. The Insider, for example, with reference to telegram channel Black Mirror reported on the correspondence with the Metropolitan of the then Minister of culture Vladimir Medinsky. It followed that the official was behind the campaign against independent Russian theatre workers, which has led to the courts. For example, Medina closely followed the activities of the artistic Director of “Gogol-center” Kirill Serebrennikov and complained about him “the spiritual father of Putin.” The Minister also sent a complaint to Shevkunova production of “Tannhauser” Novosibirsk academic theatre of Opera and ballet.