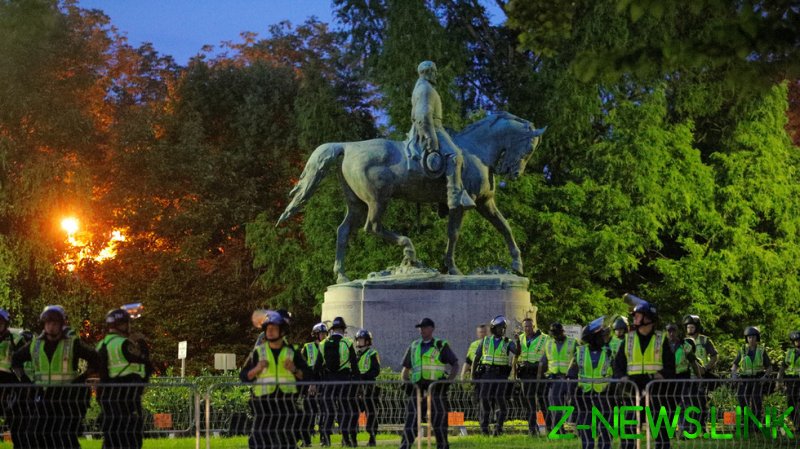 Along with a nearby statue to Confederate Gen. Thomas J. ‘Stonewall’ Jackson, the city’s now-famous statue of Robert E. Lee may be taken down if Charlottesville so desires, Virginia’s state Supreme Court ruled on Thursday, overturning an October 2019 Circuit Court decision that allowed the statues to remain in place and in full view of the public.

The Lee statue was at the center of the infamous ‘Unite the Right’ rally in August 2017 in which counter-protester Heyer died after being hit by a car. The vehicle was driven by James Alex Fields Jr., a white-supremacist protester who was later sentenced to life plus 419 years in prison on federal hate crime charges for Heyer’s murder and the injury of several other counter-protesters.

In his decision to reverse the Circuit Court’s ruling, State Supreme Justice Bernard Goodwyn argued that both the Jackson and Lee statues had been put up long before a 1997 law regulating “disturbance of or interference with” war monuments and memorials had been passed. The city hadn’t had the legal right to erect the statues in the first place, rendering irrelevant any legal question as to their removal.

The removal of the statues was announced in February 2017, as the Charlottesville City Council planned not only to remove the Lee and Jackson statues from their eponymous parks, but also to rename and redesign both parks. That initial resolution was ultimately stayed by a lawsuit filed by a coalition of Confederate heritage groups the following month, which used as the basis for their legal argument the 1997 law Goodwyn has invalidated.

At the same time, the alt-right groups were planning their rally, which was held in August and arguably led to the collapse of the political movements that had called themselves the ‘alt-right’, as the word became radioactive and groups that had once worn it proudly scrambled to distance themselves from it. Since the rally, the Confederate flag has been banned from public display in some states, and denounced as a racist symbol in others.

Goodwyn cited the death of Heyer, a 32-year-old paralegal, as a valid reason for Charlottesville to cover up the statues in 2017, referring to “the lives [sic] lost in Charlottesville during the so-called ‘Unite the Right’ rally.” While upwards of nineteen other people were injured, Heyer was the only victim to lose her life during the chaos.