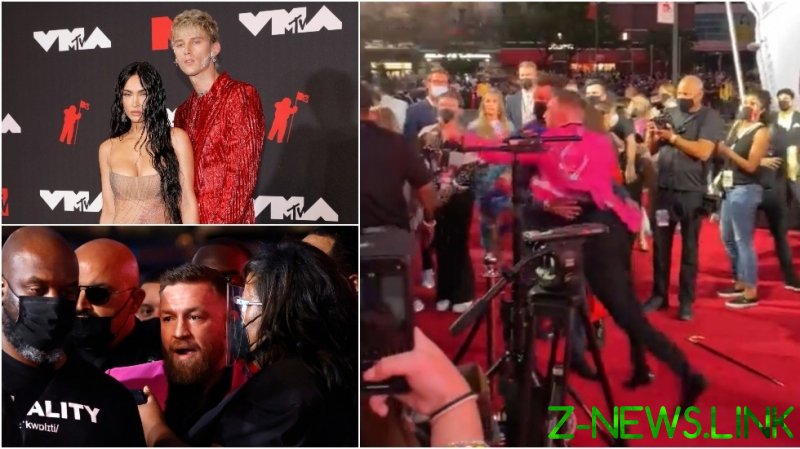 Former two-weight UFC champ McGregor and the musician – real name Colson Baker – were seen almost coming to blows at the star-studded event at the Barclays Center.

Dressed in a bright pint jacket, McGregor was seen appearing to lunge at the rapper, who was with partner Megan Fox, and also hurled a drink in his direction as security staff struggled to intervene.

US celebrity news outlet TMZ claimed that the incident was sparked when Kelly refused a photo request from McGregor.

That apparently escalated into the Irishman being pushed and spilling part of his drink, before he lashed out in fury.

McGregor, however, denied those claims in an interview later on the red carpet.

“Nothing happened with me, I only fight real fighters. People that actually fight,” said The Notorious.

“I certainly don’t fight little Vanilla Ice white rappers. I don’t even know the guy. I don’t know anything about him, except that he’s with Megan Fox.”

McGregor’s management company also issued a statement saying the UFC star “did not ask anyone for a picture, nor did he instigate this incident.”

McGregor, who was at the event with partner Dee Devlin, is only just returning to training after snapping his left leg in his last fight against Dustin Poirier, and was seen being handed back his walking cane after the scuffle.

The 33-year-old later appeared on stage to give a speech and present his friend Justin Bieber with the Artist of the Year award.

Would-be combatant Kelly was also among the winners, picking up the award for best alternative for his song ‘My Ex’s Best Friend’ featuring Blackbear. 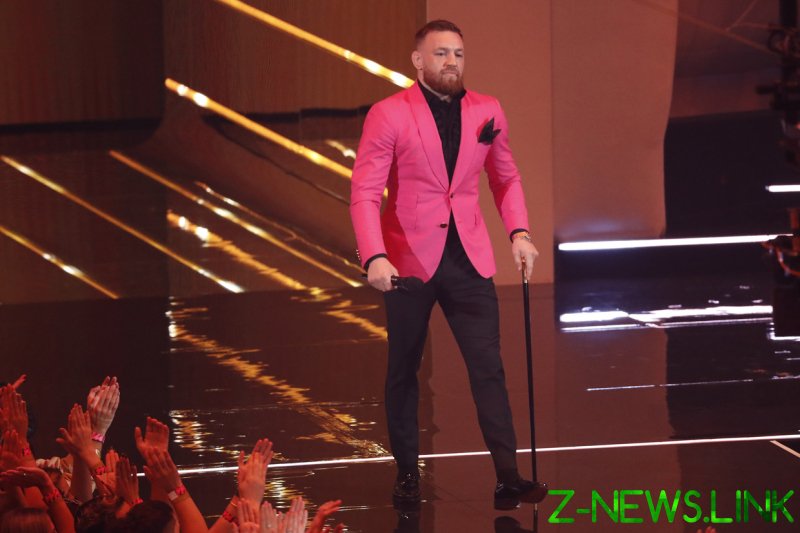 McGregor later appeared on stage to present an award. © Reuters

Elsewhere, fans defended McGregor for continuing to be a hype merchant – even though he’s been sidelined from fighting action until at least 2022.

“Conor really winning at life. Does crazy sh*t, gets everyone talking about him on Twitter. Then continues his life like nothing happened,” joked one observer.

McGregor remains the biggest draw in the MMA world, but has lost three of his last four trips to the UFC Octagon – including back-to-back defeats to Poirier this year.

The Dubliner broke his lower left leg in horrific fashion at the end of his last fight in July, handing Poirier victory by doctor’s stoppage TKO.

McGregor has vowed to return to face Poirier in a fourth fight between the pair in 2022, with the American currently 2-1 up in their trilogy.