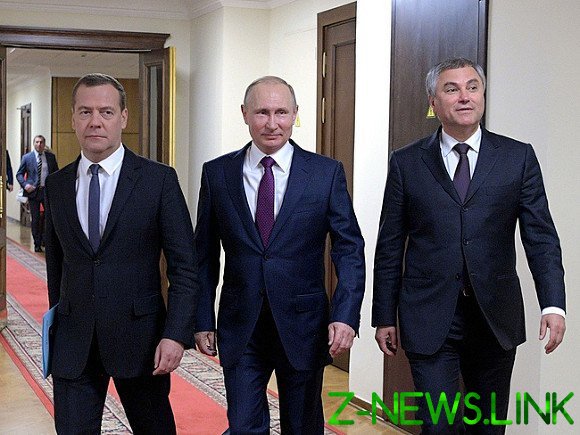 The transformation of Russia into a parliamentary Republic now looks like one of the most incredible scenarios for the transfer of power in 2024.

In the yard in 2019, but almost all have been living in anticipation of 2024. Dreaming of a day when there will be long awaited transfer of power or, as is now fashionable to say, transit/Shuttle service. Media and anonymous telegram-channels filled with different stuffing, versions, and leaks — how to thread the needle and come up with a scheme in which Vladimir Putin continues to rule Russia once more will not be able to officially take up his current post.

I must say at once that no one believes that scenario again on 31 December 1999, when Russia’s first President Boris Yeltsin suddenly announced that voluntarily resigned and apologized to the Russians. The most simple variant, in which the state Duma will abolish the constitutional restrictions on the stay of the President in power, are also not discussed. Too crazy it would look for our country.

And here with the filing of an influential foreign media in the Russian information space for several weeks discussed the idea of Russia’s transition to a parliamentary Republic. Supposedly a model transfer now among other work in the Kremlin.

In this scenario, Vladimir Putin as the leader of the ruling party must transfer to the chair of the Prime Minister, at the same time there will be a redistribution of power in his favor with the transformation of the presidency into a mere Convention.

Oil poured into the fire, and the article of the speaker of the state Duma Vyacheslav Volodin on strengthening the role of Parliament, which came to light after just a few days after the sensational publication. It is noteworthy that this article does not contain anything new, and repeated the so-called April offers Volodin of giving the Duma the right to participate in the consultations on forming the government.

Attention here was attracted by the Kremlin’s reaction to the speech of the speaker, which at this time was very favorable, which in turn prompted the idea of harmonization Volodin their actions with the country’s leadership.

It is not surprising that numerous experts immediately began to interpret article Volodin in the context of a possible transition to a parliamentary Republic. In such a situation, and the speaker of the state Duma appears almost the sole beneficiary of the model that looks like German. Probably dreaming, as it further directs the state Duma and, together with the Chancellor, i.e. Prime Minister Putin decide the fate of the country.

At the same time, the nominal Russian President, it is even possible that they will again become the current Prime Minister Dmitry Medvedev, is found for Protocol with foreign leaders, visits exhibitions and laying flowers to the monuments. The head of state is no more real power, by and large, it performs Executive functions.

But, most importantly, from the vertical of power here falls omnipotent presidential administration, whose status, incidentally, is generally not spelled out in the Constitution. In other words, there are no intermediaries between Volodin and Putin. Isn’t it a dream for the Chairman of the state Duma?

But here’s the thing — his article was a signal that the Kremlin the option of transition to a parliamentary Republic seriously no one is considering. Otherwise, Volodin would not offer, in fact, to curtail the powers of Prime Minister, committing to the process of consultations on the candidates of Ministers (albeit without veto power) Duma faction. On the contrary, the speaker spoke very conservatively, without compromising the institution of the presidency.

The fact that Russia’s transition to a parliamentary Republic at the moment have not created the necessary prerequisites and conditions. This and the presence of strong parties, the holding of free elections, the rejection of personalized decision-making system, etc. on the Contrary, in recent years, especially on the example of the Moscow city Duma elections, the authorities make it clear that playing at democracy they were considered dangerous and it’s time for them to complete because of the ever-decreasing standard of living, the voter becomes unpredictable and can choose the one to have.

And what is the relationship between “vintilovo” at meetings, refusal to register candidates and new parties can become real contenders for power, mechanical voting in the state Duma with the legwork of “button pushers” on the series and such form of government as a parliamentary Republic?

In General, the “top” have obviously decided that Russia until such a gift is not yet ripe. Volodin, apparently, with the publication of a “living Constitution” chased very prosaic purpose. As it is not obvious, a former senior official of the presidential administration, which in 2016 was sent to lead the Duma, it seems, is dangerous for democracy in the game (remember his slogan “competitiveness-openness-legitimacy” under which the elections of the mayor of the capital was allowed Alexei Navalny), still if doesn’t want to take revenge, it seeks at least to hold on to his current position after the parliamentary elections in 2021.

And for this we need to show himself an effective Manager, full of ideas, and their content is few people are interested. As for the edits of the Constitution, Volodin here a lot and not asking. Well, what will the admission of fractions to the consultations on forming the government in which they participate informally now? Oh, nothing, just another reason to talk on camera. The formation of the government “national trust”, which still dreams of Communist party leader Gennady Zyuganov, the results of such consultations, certainly not worth waiting.

Another thing — your so-called “dormant powers”, the deputies, under the leadership of Volodin for all his time in Parliament so never used it. But it could at least once to hold a parliamentary investigation, may refuse to accept the law, like raising the retirement age or the punishment for insulting the authorities to declare a vote of no confidence in the government…

But no. Because Volodin knows where the “red lines” that cannot be crossed, because fraught. Here, for example, to play the shadow Minister for foreign Affairs, announcing sanctions against Georgia and collecting in Moscow motley forums