Home / policy / Communists have returned to fight for the Mausoleum

Communists have returned to fight for the Mausoleum 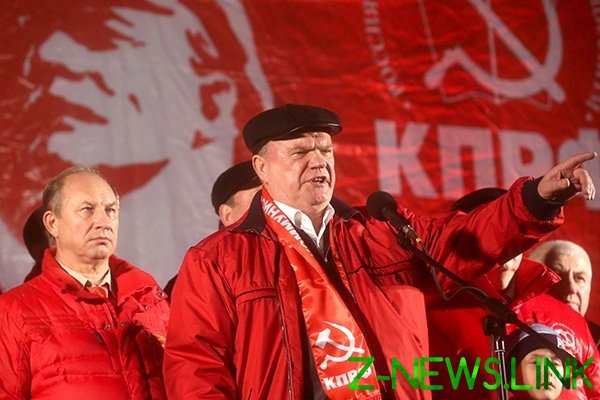 The Communist party has not abandoned the all-Russian socio-economic protest 20 June events June 22 to commemorate the beginning of world war II. Left applied for rallies and demonstrations in all major cities, but everywhere was refused. Action had to minimize to pickets and meetings of citizens with members. While the leadership of the Communist party supports the opposition degree requirements to cancel e-voting and do not drape the Lenin Mausoleum during the parade on June 24. According to experts, the Communists have no need to go to the radicalisation because they work with his nuclear electorate.

On 20 June the Communists intend to raise the slogan “Defend the socio-economic rights of citizens!”.

At the meeting of the headquarters of protest actions, according to “NEZAVISIMAYA Gazeta”, it was decided to touch upon the topic of amendments to the Constitution and the national voting.

Chief of staff, Deputy Chairman of the CPRF Central Committee Vladimir Kashin, told “NEZAVISIMAYA Gazeta” that the party has applied to all regions of the marches and rallies, but in connection with the epidemiological limitations everywhere was a failure. Therefore, it was decided to hold mass pickets where possible, and where there is there single. Kashin said that the Communist party will now try to submit a notice on 27 June and 4 July. Last date, for example, was chosen for Moscow.

The Deputy Chairman of the KPRF Central Committee Dmitri Novikov explained, “NEZAVISIMAYA Gazeta” in Moscow, Petersburg and many other major cities, the Communists appealed to the authorities several times. The last day of negotiations is Friday, June 19. “To date, not agreed no big rally or demonstration,” he confirmed. In the capital, 20 June there will be two meetings of citizens with deputies of the city Duma and state Duma Nikolai Zubrilin and Valery Rashkin. In other regions, the sizes of activity are selected depending on local conditions. At the same time, Novikov stressed that one of the main themes of the protest will be amendments to the Constitution.

But June 22 will be exactly the commemorations of the war. However, Communist party leader Gennady Zyuganov has politicized this day. He publicly opposed the draping of the Lenin mausoleum during the Victory Parade. President Vladimir Putin has sent a corresponding appeal on behalf of the Communist party and about 40 of public associations. “We believe it’s inappropriate to hide the Lenin mausoleum for any kind of drape and change his daily appearance – so important and dear to the citizens of the country,” said Zyuganov.

As explained Novikov, the Communists strongly support the government’s desire to honor veterans and to honor the memory of the victors, but “putting on a mask at the mausoleum unacceptable”. That’s the way he answered the question, “NG”, will the party leadership participation in the event, even if the requirement is not met. By the way, the mausoleum is now not just draped, but actually wiped off the red square with elaborate shields.

Another like a harsh statement, Zyuganov became his call to the head of the Central election Commission, Ella Pamfilova, to abandon the use of remote e-voting in all elections and voting on amendments to the Constitution. Though not very clear why the Communist party did not go with this requirement besides the President, who had the opportunity to return the draft law for revision to Parliament. Apparently, Zyuganov and therefore did not require this from Putin that knew in advance which one will give the answer.

The President of the Russian Association of political advisers Alexey Kurtov said, “NEZAVISIMAYA Gazeta” that the Communist party “not only because the traditional organizing rallies and demonstrations almost everywhere are restrictive measures, not because they could not or would not.” However, he admitted that from the point of view of external observation all these actions are aimed at mobilizing their voters. Active attempts to transfer to assepoester voters do not because of the limited set of tools. According to the expert, to work with the wider left needs fresh ideas, statements on the drape of the mausoleum is designed only to core supporters. “Attracting attention to yourself, appeal only to his is a standard work of the Communist party. The Communists do not know what slogan to rally obmerochny the electorate, and do not aspire to it”, – said Kurts.

The head of the Political expert group Konstantin Kalachev agree that there is work with the base electorate, all plans and actions aimed at the mobilization of the asset. “About trying to increase support through appeal to the constitutional vote is not necessary to speak, although the possibilities are there. By the way, they are already used by individual deputies-Communists,” – said the expert. Kalachev noted the relevance of previous findings: “overall, the Communist party is not ready to stand in rigid opposition to the authorities, the last 20 years, it remains a systemic party. She has no reason for radicalization, which alone could attract observetodo voter. While the Communists are satisfied with the role of the second party in the country, the more that support, and so growing due to the worsening economic situation, the fall of social well-being and, consequently, the growth of leftist sentiments. The Communists, as always, fighting for seats, but not power, because even a campaign based solely on his own.”