Home / Society / Communism is a year old age of the world

Communism is a year old age of the world 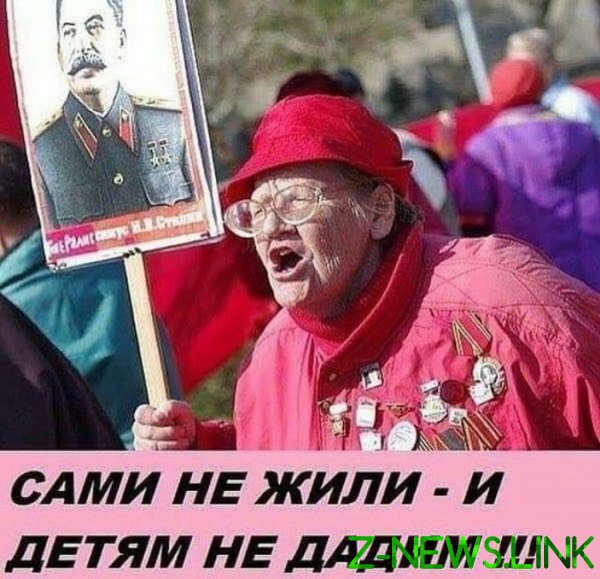 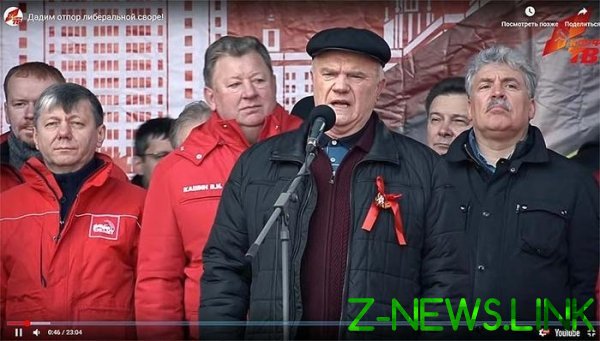 On the photo: Communist party Leader Gennady Zyuganov speaks March 23, 2019 at the rally “for social justice and workers ‘rights”

February 23, 2019, the Communist party decided to scrape the bottom of the barrel and to hold in Moscow a meeting “for social justice and workers ‘rights”. Apparently Gennady Andreyevich decided to show his players that they are still alive and their place Grudinina will not yield. But the internal float of the Communist party in this case is not interesting. Interesting that this rally – the rally, which was made by the leader of the party gathered less than three thousand people. And what people. Here are a few telling photos.

Here is the typical participants of Communist rallies 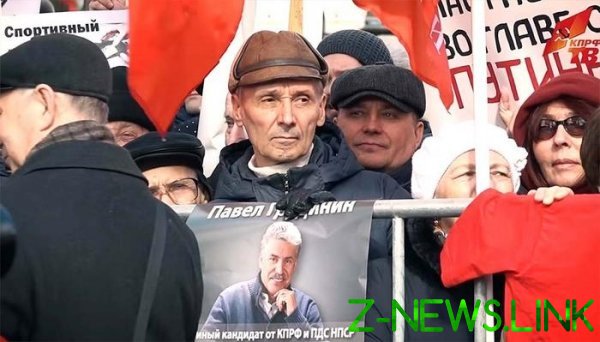 Most likely some of the military in the past. 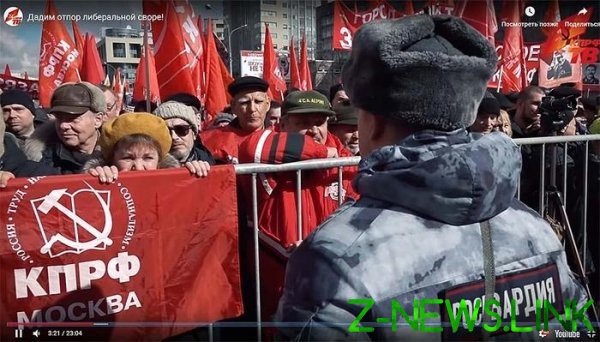 The faces of the people “who are over…”, and so far behind. And if you’ve been somebody who’s 40, it will be then in the Communist media are described: “there was a youth”.

However, here in this picture you can even find someone under the age of forty. 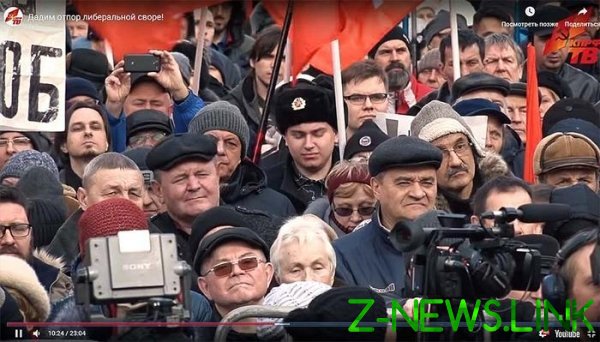 I count four: one on the left in a counter-revolutionary goatee, one in the center in a black hat with a badge, immediately followed by one with glasses and a little further away, almost hidden the flag pole. So Yes, the youth was.

Well, they are the ones who listens to the crowd. 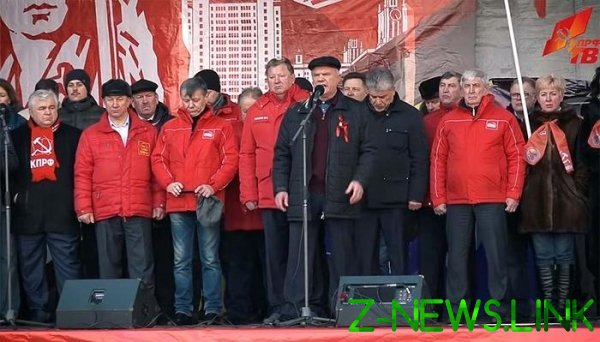 The organizers of the rally, the Communist party did not even know such thing as non-verbal transmission of information. But at least I learned from the Communists of the Soviet era. Those knew that beautiful images of the rally have everywhere Komsomol forward to expose and pioneers. No, these, today, are already so deep into insanity that even this will not understand and assemble a picture of the rally, like this report from Palace of Congresses during the reporting of the report of the Secretary-General of the CPSU Central Committee L. I. Brezhnev. Boring and very dull. I just want these people to employ. Although, between you and me, on this platform are very, very rich. Let not all, but the main are wealthy, some even millionaires. With such mugs, they appeal to ideals of social justice and bring down thunder and lightning on the capitalists. And they themselves on their official website published these pictures. It’s not an enemy diversion.

See also:  The lawyer explained that means the presence of codeine in blood Zaitseva

Another exalted citizen may exclaim: “So it’s the Communist party! It’s the renegades and opportunists! They have long betrayed the ideals of Lenin and Marx! And these Communists the young one”.

Well, let’s look at these Communists who are “not Communist”. Here, for example. 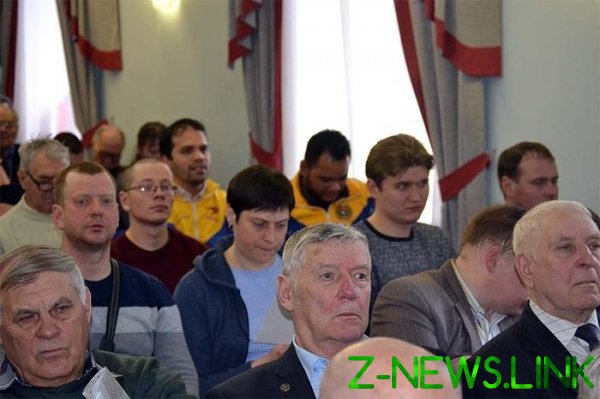 The same eggs, side view. The same recognizable faces. And again there are young people or three people. One that is closer to the curtain, reminds the youth with the previous photos – well, there is a person in a black fur hat with a badge. Can one and the same?

However at present the Communists are even mulattoes. There, in blue and yellow jackets. Or is it the messengers of far-off Venezuela?

Well, there is with the Bureau of real Communists? 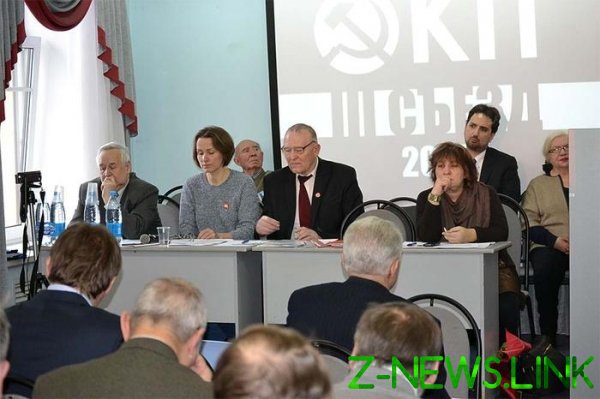 This group called youth is possible only with very big stretch. But the Central figure reminds me of the Immortal Kashchei the Brezhnev – Suslov. Real Communists!

You ask why the last two photographs? And this is the Convention of the United Communist Party – one of the fiercest critics of the Communist party. The Congress took place in February of this year and here he writes about his party, the journalist:

“many in the media who ignored the event, many lost. Lakeeva speech at the Congress was exceptionally capacious. Without pathos and ostentation listed all the achievements and successes of the party, development prospects, pointed out the shortcomings; and that is not for show, specifically for the case without common to many party congresses singing praises and spreading glamorous oil. Particularly interesting points of the speech there were reports of wide international relations of the TFC, the Communist and left parties from different countries, cooperation of the party with the workers Union of the Russian Federation and their participation in joint activities, ready for intended cooperation with the Russian left-wing movements…”

They even casein, the language of the editorials of the newspaper “Pravda” reproduce meticulously! And the journalist writes: “At the Congress of the GST was attended by quite a large number of young people, perhaps if not half, certainly a third of the members of the Congress crossed the thirties.”. Yeah, the photo is perfectly visible, this “certainly the third”. Although…

Let’s count heads. In the previous pictures the hall there are 18 (eighteen) goals. Three of them – just more or less young. Plus two messenger of the distant Venezuela. OK, maybe a stretch to be third. So console myself with fellow Communists. Go to their congresses, the third among moldy red old and happily breaks out, noticing some more or less young face, then to write in the report: “youth was, if not half, then exactly one – third”.

In General, it is all these modern Communist party? This is a bunch of jerks. Once the streets of Soviet cities were decorated with faded sickening banners: “Communism is the youth of the world”. But even then, in the Brezhnev era, it was funny, but the mummies from the Politburo could still drive on their mass ritual millions of Komsomol members for pictures. And today, when the Communist party – the second largest party in the state Duma – the rally in Moscow hardly collects about three thousand people, most of whom are senior citizens, and other Communist organizations differ only in that they will gather even fewer people, it is obvious to anyone that communism is flabby, smelling of mothballs, old age of the world.

Only where they on a horse – so it’s on the Internet. That’s where all these old men, any young of the pack. Registering yourself every tens of accounts in all social networks, they run everywhere and everywhere scribble, scribble, scribble, how good life was in the USSR and that “communism is the youth of the world”. However, their real faces can be seen only at such gatherings, like the Congress GST or meeting of the Communist party.