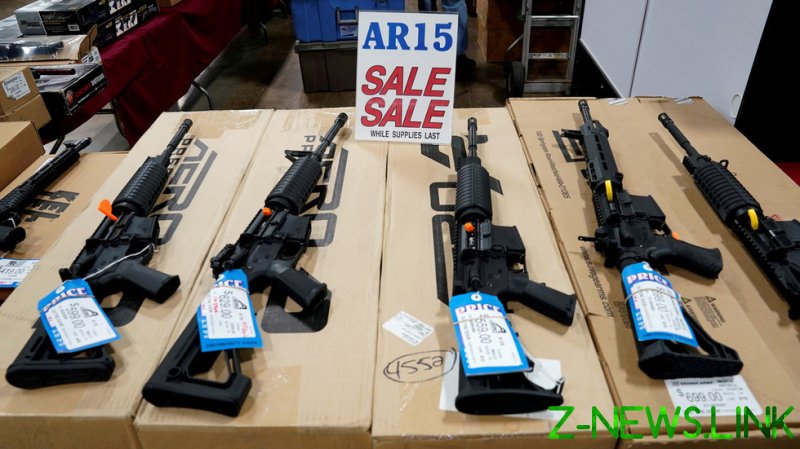 It’s a side of the debate that most of the world has never heard.

The pro-gun lobby is the domain of right-wing, conservative Republicans in America. Or is it?

The Socialist Rifle Association is everything the stereotypical gun community isn’t, apart from their steadfast commitment to bear arms. Since forming in 2018, they now claim to have over 10,000 members, including in every single US state.

Speaking to RT.com, the group’s communications director Lucas Hubbard said: “Commies with guns has always been a thing, we just don’t flaunt it like the right does.”

The firearm organization regularly gets death threats and abuse on social media, but are determined to stick to their cause.

“Our whole point is to be unabashedly inexistent, we try and produce privacy for our members but us existing is a liberatory struggle. Existence is resistance in our case, the more we exist publicly, the more we can further our goals. If we hide in obscurity, we’re being erased,” Hubbard said.

Despite their name, there’s more to the SRA than meets the eye. Not all members own firearms or wish to. The group performs social roles including feeding events for the homeless, running community gardens and helping with disaster relief. They say they are not a political organisation.

“We’re an educational, non-profit dedicated to community defence and firearms is actually quite a small portion of that, as how can you really provide safety and security for your community if your hierarchy of needs are not being met, things like food and shelter?” Hubbard explained.

“We do a lot of outreach, mutual aid and getting food in people’s bellies and disaster relief for whatever your communities may need.  We have a whole giant organ that operates around that function, that is far larger than our firearms organ,” the SRA spokesperson said.

“In America, whenever gun control happens or whenever social programs get suspended, it is marginalised communities that get hurt the worst.”

For non-Americans, it’s hard to equate gun control discriminating against the marginalised.

How does the SRA feel that happens?

Hubbard said: “Like with the banning of silencers, so poor people during the depression could not acquire wild game out in the woods without being noticed. That’s just one example. The next was Ronald Reagan’s ban in California for the public carrying of firearms, that was because The Black Panthers were protecting their communities and he didn’t like that. We can trace back historically how gun control as well as the Second Amendment has always been racially motivated – we chiefly buck against that.”

Hubbard is white and non-binary and admits the SRA want to promote a more diverse side of America than is traditionally witnessed in the gun debate.

“We need to give them representation that they don’t have. There are millions of black gun owners in America, how many have you seen? We are trying to rectify that.”

Hubbard said: “There’s plenty of misogyny in gun ownership in America, I watch a lot of Gun Tube, and you widely see instructors addressing only men. I see in these people’s language, they would’t even consider a women could be in their class or watching their videos or a gender non-conforming person would either. You also hear a lot of denigration in those classes of people who don’t fit the macho stereotype. American gun culture is quite exclusionary, that’s one of the reasons the SRA started.”

One trait the SRA do share with their right-wing rivals is a mistrust of the police. In leftist circles this dates back to COINTELPRO which was an FBI operation that ran from 1956 to 1971. It targeted Communists, civil rights groups and feminist organisations plus activists like Malcolm X and Martin Luther King Jr.

“Leftists keep their head underground because of that, it saw a lot of Communists and civil rights leaders killed in America. So when leftists get together, we don’t talk about it as historically and recently they were literally trying to kill us in our country,” said Hubbard. “Leftist organisations at all is not a thing we advertise, particularly leftists with guns because of the legitimate threat of violence we face.”

According to the spokesperson, at an SRA event last month to provide food for the homeless, posters advertising the event were ripped down and a deluge of death threats were sent. Then during the event, pickup trucks flying the American flag drove by menacingly.

“The American flag has become synonymous with Conservatism as they chose to adopt that as their symbol despite progressive liberals feeling as equally deserving of that symbol,” said Hubbard.

The people in trucks with flags are almost certainly Republicans as it was a common sight during Donald Trump rallies. Asked whether with Joe Biden and Kamala Harris in The White House  things are shifting to address the problems the SRA feel exist, Hubbard replied:

“Historically the two parties have switched sides of issues like slavery, segregation and gay rights – it just depends on what intersection of the population the party wants to actuate at the time. We view them as basically the same party except at the moment The Democrats aesthetically favor progressivism as part of liberalism. No fundamental change has happened between the two different administrations and we don’t anticipate it to.”

So they are neither for or against Biden over Trump, but what about the issue of mass shootings?

Europeans are often bemused at the American attitude to protecting gun ownership, even though thousands are killed every year via these arms, like at the recent tragedy in Boulder. The SRA highlight the Firearm Owners’ Protection Act of 1986, which banned the sale of machine guns to civilians after that date and if someone wishes to acquire one, both parties must file official paperwork before the transfer is approved. The result of this meant the price of machine guns is far higher than they used to be and there are fewer guns on the market.

“What that did was make every registered machine gun shoot up in price, absolutely skyrocket. What was once a $200 M-16 is now $20,000. That removed the ability of working class individuals to purchase machine guns, it did not remove the ability of rich people to acquire them,” Hubbard said.

“I commonly read about acid attacks, car attacks and knifings in the UK. Ted Kaczynski did one of the most devastating attacks on Americans, no firearms were involved. 9/11 killed nearly 3,000 people, [the hijackers] used box cutters. You’re not going to stop violence by outlawing the implements by which people do violence – you have to address the mercurial conditions of those people committing crimes, you have to cause them not to do crimes.”

Addressing the underlying causes is part of the SRA’s work. As well as providing instruction on gun usage and ownership, they are committed to mutual aid, a community policy where people take care and are responsible for one another. But the SRA feel there will always be a place for them. They don’t see the job ever being done.

“I don’t see us not being needed. What we’d like to see is workers owning the means of production, people getting paid for the value they produce instead of someone yoking out that profit from under them, we would also like to see things like universal medicine, there are many people who get into debt for medicine in America, it can be $2,000 a month for insulin otherwise you die,” Hubbard explained.

“We would see a decrease in economically driven crime if we didn’t have these economic contradictions. If we produced for people economically and they had stability, they would not be committing economic crimes.”

Part of the problem, according to the SRA, relates to how the police in America treat certain communities.

“It’s a demonstrable fact that marginalised communities are policed more heavily and cruelly than more privileged communities. You see higher rates of drug convictions along race lines, though what is reported to the WHO are similar rates of consumption, use and possession. In America there are two systems for policing and the incarcerated justice system: one is for the privileged and one for the non. We will not see equitable policing and we haven’t ever. Whatever the subject is, minorities are going to be policed harder.”

Another reason why the SRA seems so out of step with the right-wing stereotype of gun owners is that they feel much of the culture is misunderstood. Hubbard explains how AR is often used in media reports to mean ‘Assault Rifle’ but in fact it stands for the manufacturer ArmaLite: “It’s also not known that most Americans don’t shoot machine guns, I’d say one percent of Americans have been in the same room as a machine gun. I’m an instructor, I’m pretty deep into guns, I spend a lot of money on guns, I do research on them but I’ve never even held one.

“One thing we’re proud of in the SRA is there’s a statistical overrepresentation of certain marginalised communities that aren’t representative of your standard gun owner.

“I can think of a good few members of my chapter who don’t have an interest in using a firearm to protect themselves but the defense they get from our community is things like the communal garden, homeless feeding and a social network that will ensure if they are in trouble, they will be provided for.”

It seems now, there really are two sides to the never-ending American gun debate. Whatever your views, that has to be refreshing.