Combo of AstraZeneca & Sputnik V may be better way to immunize people from Covid-19, developer of Russian vaccine tells RT 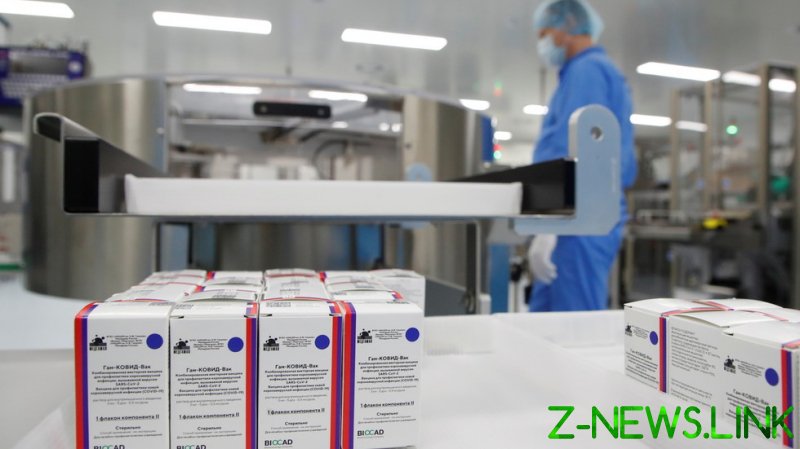 The British-Swedish vaccine and its Russian alternative took somewhat different approaches to triggering an immune response to the SARS-Cov-2 virus, and using them in a single regimen may produce a better result, Alexander Gintsburg, the head of the Gamaleya Institute, which developed Russia’s pioneering Sputnik V vaccine, told RT. On Monday, the two sides signed a deal to study this possibility.

Just like the Russian vaccine, the British product uses two injections administered weeks apart to boost immune response. The difference is that the British vaccine uses the same formula for both jabs, while the Russian shot has two different versions. The AstraZeneca vaccine uses a chimpanzee adenovirus as a delivery vector, while Sputnik V uses two different kinds of human adenoviruses.

“We will conduct a clinical trial and see how this combination works in terms of safety, immunogenicity and protectivity,” he said.

If the combo proves more effective than the AstraZeneca vaccine alone, “there would be no economic or political justification to reject it.”

In fact, every single Covid-19 vaccine developed in the world to date is based on the same principle, Gintsburg said. The idea behind all this is to “acquaint” the body with the virus without exposing it to the infection itself. For that purpose, doctors need to introduce the human immune system to a specific protein to help it recognize the virus and develop the necessary response.

The protein itself, however, appears to be too sophisticated to simply be re-created in the lab, so scientists use a gene sequence responsible for its formation in the human cells instead, the microbiologist explained. So, essentially, all vaccines are doing just that – they deliver this gene sequence to the body.

“Fundamentally, all the coronavirus vaccine manufacturers use this very same principle,” he said.

The only difference is in the “delivery methods.” The Russian scientists used the tried-and-true adenovirus platform, while America’s Moderna and Pfizer, as well as Germany’s BioNTech, opted for a relatively new messenger RNA approach.

This fact also partially explains Russia’s success in developing the first coronavirus vaccine, which received national approval in September. “We did it in five months,” Gintsburg said. This speed was achieved thanks to 25 years of adenovirus platform studies conducted at the Gamaleya Institute.

“We have vast experience in using this technology,” he added. “We even knew all the doses needed to provoke an optimal immune response with minimal side effects.”

How does the Russian vaccine work?

The Sputnik V vaccine is basically a specially modified adenovirus carrying a Covid-19 DNA sequence to human cells. Gene modifications prevent the adenovirus from reproducing, eliminating the possibility that the platform itself could infect the person receiving the jab.

“We turn the… adenoviruses into abiotic particles that are only able to deliver the needed material to the cells,” Gintsburg explained. The team also needed to get the immune response right so that it reacted to the Covid-19 gene and not the platform itself. They took a separate species of adenovirus for each of the two shots needed for full immunization.

In the way, “the human body mostly reacts to the coronavirus gene and not to the adenovirus,” the microbiologist said.

The shot might not be absolutely harmless, since those receiving it could have headaches and muscle discomfort for several days, as well as seeing their temperature go up to 38C, according to Gintsburg.

Still, he says that just between 15 and 16 percent of those receiving the Russian vaccine are likely to suffer any of these side effects. Most do not have any problems at all.

Sputnik V is just as safe as any other existing vaccine, he said, adding that “all side effects do not require any special medical intervention.”

What’s next for Sputnik V?

The Gamaleya Institute team is about to present a detailed account on the results of the Sputnik V Phase III clinical trials. Gintsburg said that his team would apply for publication in one of the scientific journals “within days.”

The publication will feature “full statistics” on the issue, he said, adding once again that the vaccine has demonstrated a 91.4-percent efficacy rate overall, and has shown to be “100 percent” effective when it comes to preventing severe cases.

“Those that got the vaccine had the disease in a form similar to a slight cold. No bacterial pneumonia, no hospitalizations,” he said.