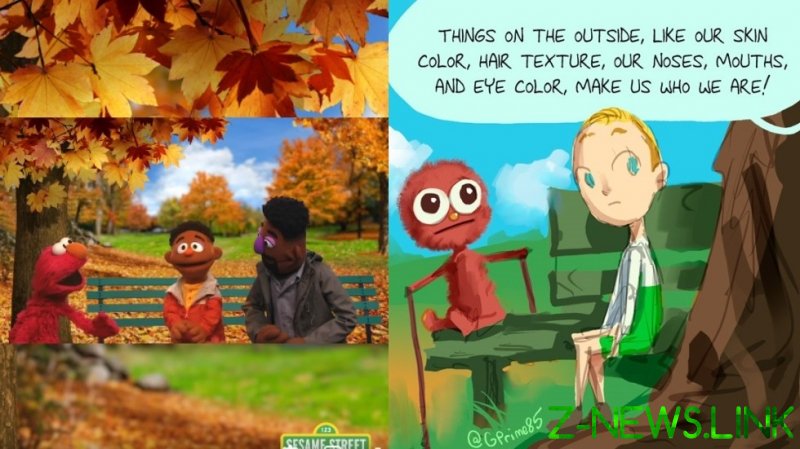 “Today’s comic was struck on Instagram,” Alexopoulos posted on Friday afternoon, adding, “how strange, as I was quoting Sesame Street verbatim.”

‘Sesame Street’ is a popular children’s show broadcast on public television in the US. Its most recent episode featured two new characters – a boy named Wes and his father Elijah – explaining to the red-furred muppet Elmo that “the color of our skin is an important part of who we are.”

Alexopoulos employed the old-fashioned substitution trick to illustrate just how racist that sentiment appears to be, featuring a white boy named Heinrich and putting the words into the mouth of Adolf Hitler, the dictator of Nazi Germany in WWII.

After the removal of the comic from Instagram, Alexopoulos posted a more “family friendly” stick-figure sketch with the same copy, only this time replacing Hitler with someone wearing a headband that says “Racist Bad.”

“For imbeciles with their heads too far up their own a***s [to] understand, the joke is ALL RACISM BAD,” he tweeted.

Instagram’s censorship of Alexopoulos’s original cartoon as encouraging “violence or attacks on anyone based on their religious, ethnic or sexual background” only served to prove his point about the content of the Sesame Street episode.

However, under the logic of intersectional critical race theory currently dominating the ‘anti-racism’ and ‘diversity’ studies in the US, racism isn’t just discrimination on the basis of skin color, but a combination of power and privilege – meaning that only ‘white’ people can be racist, while ‘communities of color’ are by definition oppressed.