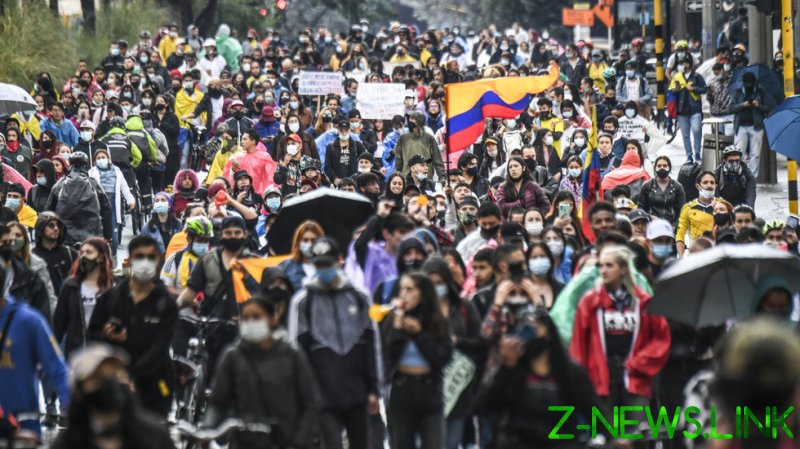 For the past few weeks, there has been a series of violent protests and clashes in the South American nation of Colombia, with more than 40 people killed and hundreds injured.

The unrest was triggered by widespread anger over plans to raise taxes and introduce austerity measures from the country’s centre-right government led by Ivan Duque Marquez at a time when unemployment is already high and Covid-19 is weighing heavily on a moribund economy.

Although Marquez withdrew the tax bill due to popular pressure, the protests have since escalated into a wider set of populist demands including, as The Nation reports, “a universal basic income and free college education for individuals and families in the lowest tax brackets.”

The events in Colombia might be dubbed Latin America’s ‘silent revolution’ in that they symbolise the struggle for social reform, equality and change across the continent as part of the fightback against a neo-liberal, pro-US elite that has presided over decades of economic stagnation and a failure to reduce poverty, while catering to the demands of the super-rich and placing the burden of state failure upon the poor.

This mirrors the anti-austerity unrest seen in Ecuador in 2019 and the persistent popularity of Luiz Inacio Lula da Silva in Brazil amid political strife, and ultimately provides a challenge to Washington, which has sought to sacrifice the prosperity and stability of the region for its own dominance.

Colombia is important because it is a lynchpin of the American security umbrella in Latin America and its petroleum monopoly. It is a nation of strategic oil reserves, but a fractured nation marred by instability and internal conflict.

Since the Cold War era, Washington has sought to sustain a status quo favourable to itself through lending support to Bogota, helping it to contain the communist Colombian National Liberation Army and a number of other revolutionary dissident groups in its longstanding civil conflict. By extension, this constituted a longstanding proxy war against the USSR and Cuba.

Although a peace deal in 2016 curbed Colombia’s longstanding violence, it has not made all of the country’s problems go away. The US dominance has seen the consolidation of right-leaning, neo-liberal political order, which has established a deeply unequal country.

A small Washington-orientated oil oligarchy sustains political power, with 10% of the population accounting for 40% of the national income. The Covid-19 pandemic has massively exacerbated the impact of this wealth gap, sending an already rising unemployment rate from 10% to over 20% of the workforce at its peak last year. Poverty affects over 40% of the population, with a lack of food and housing significant problems.

Despite all this, Marquez’s government provoked anger by aiming to place the tax burden of the pandemic not on the country’s bulging oil profits, but on the poor, with pensions, fuel and low incomes all targeted.

Although the bill was withdrawn, demands for changes to the system as a whole have intensified via the protests, and the government has been accused of violently targeting the demonstrators and even opening firing on them. Despite this, it has received implicit backing from the US, which would be very vocal in its criticism if such a rising death toll was occurring in a hostile country.

Washington has long armed Colombia’s police with weaponry to deal with protests, including stun grenades and tear gas, and has continued to provide substantial military aid. Right-wing Senator Marco Rubio has even offered open support for the government, describing the unrest as “an orchestrated effort to destabilise a democratically elected government by left-wing narco guerrilla movements and their international Marxist allies.” Predictably, he had very different things to say about protests in Hong Kong which were, by contrast, nowhere near as heavy handed and not fatal.

Ultimately, the US’ dominance over Latin America has long come at the expense of the majority, and resulted in societies run in the interests of a narrow elite. Colombia is a contested country, engulfed in turmoil, where people have striven to liberate themselves against a US-backed set of clients who – in the effort to keep out communism and socialism  – allow Washington a monopoly on their gigantic oil reserves.

We have seen recently how the US doubled down on Ecuador, yet what is happening in Colombia isn’t so much about geopolitics as it is about the hardships faced by the ordinary people and their resistance against a system which ultimately does not cater for them.

How long can the tide of change be held back here? Or for that matter, across a whole continent with remarkably similar circumstances?