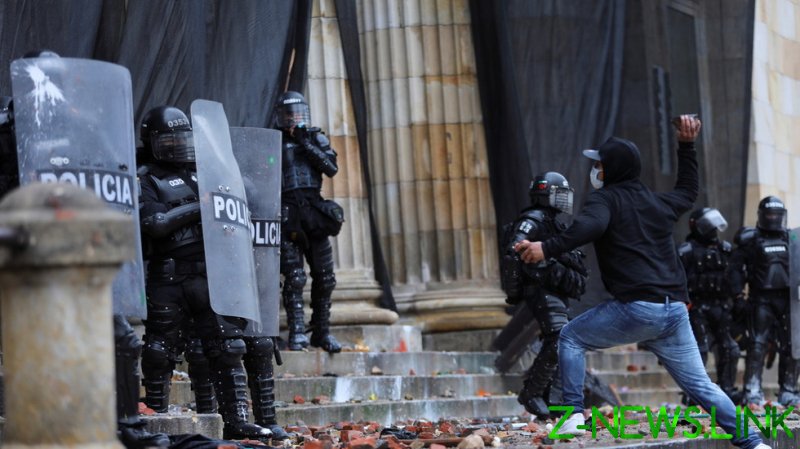 Dozens broke through the perimeter fences during a massive rally at Bolivar Square in Bogota on Wednesday and stormed the building that houses both chambers of Colombia’s parliament, while lawmakers were in session.

MP Juanita Goebertus tweeted that the session was suspended and lawmakers were evacuated when the crowd attacked the building. The session was later resumed.

The protests, which were sparked by controversial tax reform and have been raging across the South American country since April 28, saw fierce clashes with police, arson and looting.

Defense Minister Carlos Holmes Trujillo was quoted by the Bogota Post as saying that the rioters vandalized 60 police facilities and several CAIs – small kiosk-type police stations – were set on fire in the capital.

Police officer Juan Contreras told Caracol TV how he and 14 colleagues had to run for their lives when a group of rioters pelted their CAI with stones in Bogota’s La Aurora neighborhood and attempted to burn the structure down with the officers inside.

The activists, meanwhile, accuse the police of violently cracking down on the protests. A video circulating on social media shows what appears to be an officer firing several rounds at fleeing people.

A leading human rights group, Temblores, said it has recorded 1,708 cases of police violence since the start of the protests. The NGO said 831 people were “arbitrarily detained,” 222 were physically assaulted, and 37 were killed.

The Colombian Ombudsman’s Office reported different numbers on Wednesday, saying 24 were killed in recent days, out of which 11 deaths occurred at the protests, six were not connected to the rallies and seven were being investigated. Colombian Attorney

General Francisco Barbosa said the police were responsible for three out of the 11 deaths at the protests.

Ombudsman Carlos Camargo Asis added that his office received 89 reports about missing persons, and that 38 people had eventually been found.

The public was angered after the government proposed vastly expanding taxation – which would include applying the sales tax to more products – and eliminating many tax exemptions. By doing so authorities wanted to increase social spending and reduce the budget deficit. However, many were shocked by the drastic measures at a time when Colombian society is reeling from the economic crisis that was exacerbated by the Covid-19 pandemic.

Colombian President Ivan Duque said on Sunday that he was withdrawing the unpopular reform and vowed to introduce a better solution based on the “principles of consensus.” Finance Minister Alberto Carrasquilla, who was responsible for the reform, has resigned.