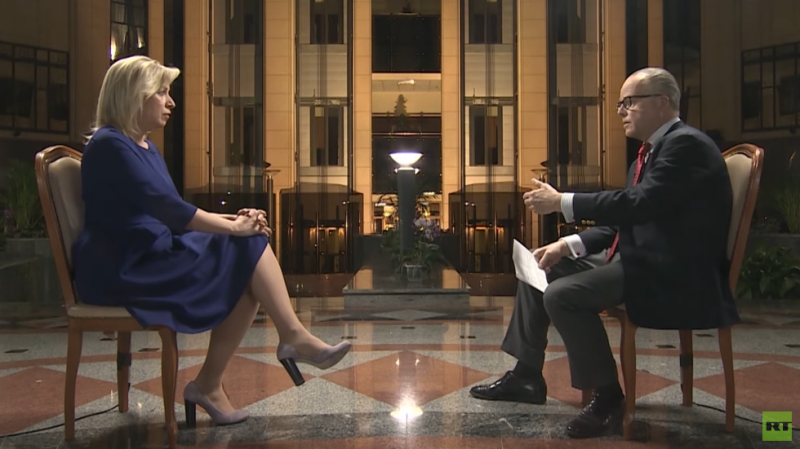 The consistently cold relations between the West and Russia have been heightened by a series of major scandals recently, despite these being based on imaginary grounds. For instance, massive military drills in Russia’s southeast have prompted hysteria in multiple NATO countries and a fresh wave of doomsday predictions regarding an impending war between Russia and Ukraine – which, again, did not happen.

Such behavior on the West’s part is hardly surprising, Russia’s Foreign Ministry spokeswoman Maria Zakharova told RT Deutsch’s Thomas Fasbender in an exclusive interview, given the efforts that Western counties have put into painting Russia as an “aggressor” over the years.

“It seems to me that our Western partners have let their imaginations run wild. They seem to be seeing things when there’s nothing there, and not seeing the obvious. It’s an amazing thing, really, to be able to live in fantasy land,” she said.

The years-long Western campaign to paint Russia as an “aggressor” state has also affected the global response to the coronavirus pandemic, Zakharova believes. Instead of cooperating with Russia and buying its Covid-19 Sputnik V vaccine, the first in the world to be registered, too much effort has been put into trying to deny its very existence and otherwise tarnish its reputation.

“There was a major campaign against our vaccine, against what we had to offer the world. We handled it. Unfortunately, many countries, including EU states, wasted time,” Zakharova said. “Many states received this vaccine, some on a trial basis. Many of them began to buy it right away. Unfortunately, the EU is punishing itself again, just as Prague did with our diplomats.”

The ongoing coronavirus crisis has “highlighted massive problems in the EU and the West as a whole,” as they had all the resources to lead the global fight against the disease, but failed to do so.

A similar lack of ability to act as an independent entity has been demonstrated during another ongoing scandal – the spy affair launched by Prague. The Czech Republic has accused Russian military intelligence of blowing up its ammunition depot back in 2014. While no solid proof of Russia’s alleged involvement has been presented, Prague launched a diplomatic broadside, opting to expel Russian diplomats.

“They got what they wanted. I would even say that they got what they couldn’t dream about. I think that when Prague started this reckless game, it didn’t bother to calculate the consequences,” Zakharova said, adding that it was unlikely that the Czech Republic decided to trigger the bitter spat on its own.

An unexpectedly strong reaction by Moscow, which did not use its usual mirror approach this time, caught the Czechs by surprise. “That’s why we are seeing such absurd actions and contradictory statements. They kept saying different things about the explosions and accusations against Russia. There were a lot of mixed messages, a cacophony of voices, so to speak,” Zakharova added.