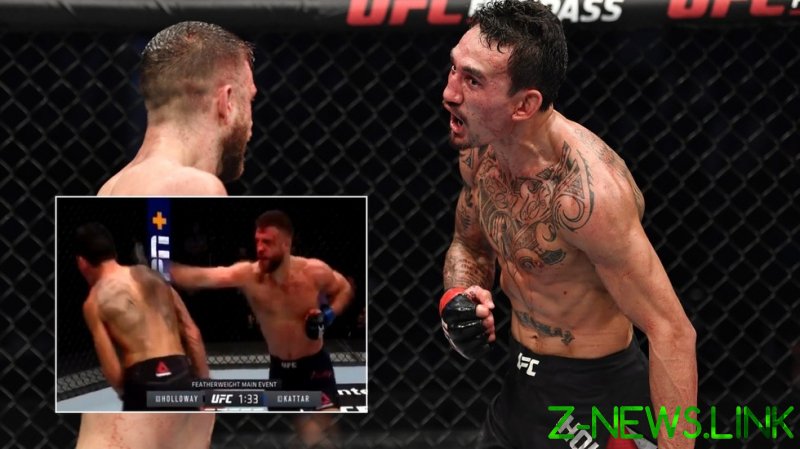 Former UFC featherweight champion Holloway turned on the style to utterly dominate Calvin Kattar over five rounds as he produced arguably the best performance of his career, and one of the most comprehensive displays from any fighter in a UFC main event in recent memory.

Holloway’s remarkable display went to new levels in the later rounds, as he took the opportunity to talk to the commentary team during the fight when, between ducking Kattar’s punches and landing his own, he shouted to Jon Anik, Daniel Cormier and Dan Hardy, “I’M THE BEST BOXER IN THE UFC!”

And, after a performance like that, it’s hard to disagree.

Holloway’s slick striking, superb timing and superhuman work rate took him to a landslide decision on the scorecards, as he ran out the winner with scores of 50-43, 50-43, 50-42 after a fight that set a stack of new UFC striking records in the process.

After his blistering performance, Holloway hinted that he’d be more than happy to welcome UFC lightweight champ Khabib out of retirement and offer the Russian superstar a fresh new challenge for his title, and unbeaten record.

The pair nearly fought for the vacant lightweight title at UFC 223, but the athletic commission prevented then-featherweight champ Holloway from stepping up a weight class on short notice to face Khabib. But it seems Holloway is more than happy to step up again, if asked.

“Khabib wanted somebody to impress him. If I did impress him – because I know the way he thinks,” he said.

“He wants to fight for his legacy, he doesn’t care about money. He wants the toughest opponents. If I got to push him over the edge so be it. We had one of the best press conferences ever, we just didn’t have the fight yet. I respect the dude.”

Holloway also had words for reigning featherweight champ Volkanovski, who beat the Hawaiian twice to first win, then retain the title. But that second win was a controversial one, with many feeling Holloway was robbed of the victory by some questionable scoring by the judges.

Holloway’s performance undoubtedly proved his credentials for another title shot, but with Volkanovski eyeing new challenges, “Blessed” made the point of letting it be known who the top contender at 145 pounds really is.

“At the end of the day, I’m not going to force somebody to fight me. I’m ready. Dana can send the contract whenever and we’ll get it on the way.”